I received this letter in June regarding my email correspondence with Wheelchair Services and Social Services, lets be clear I did not excessively email or phone them, probably 3 or 4 phone calls and 33 emails (a lot of which were confirming I had received an email) in about 105 days.

As I was unhappy signing such a limiting agreement, actually I was unhappy to sign any agreement limiting my communication with a public body, I decided to compromise and send the counter offer below. 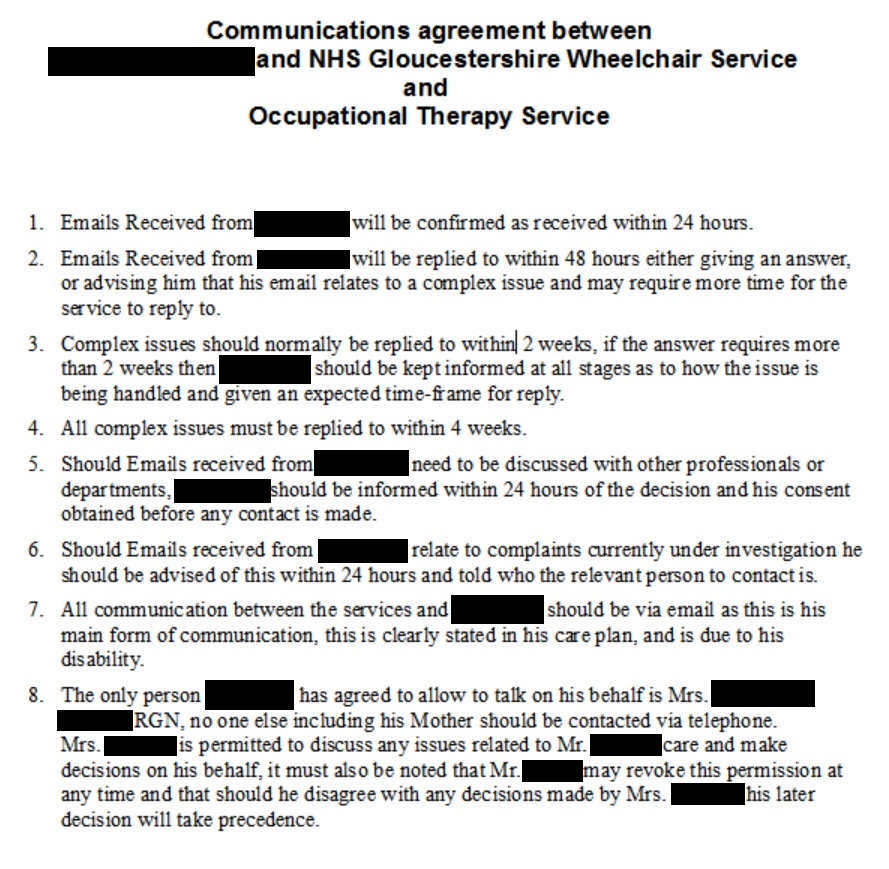 I received the following letter in reply.

Quite why Mrs W (OT) felt the need to involve the litigation manager I am unsure, I had not complained about their service and was not the one who wanted an agreement in the first place, I agreed to a meeting with Mrs W, my RGN, Mrs W (litigation manager) and myself anyway.

I prepared pretty well for the meeting, reading up on disability discrimination and then seeking legal advice from the DLS, I was told that the Equality Act 2010 was most relevant to me, there are lots of guides at the Home Office which are very helpful.  In my case Wheelchair Services must make reasonable adjustments as I can not use the telephone, this was set to be my main argument.

I had the meeting last week it was far quicker and easier than I expected, the meeting started with Mrs T explaining what the meeting was about, apparently Wheelchair Services have 9000 clients so I shouldn’t expect a quick answer and I should understand phoning or emailing to rush them was not helpful, she then went on to say that the NHS confirmed when an email was received and would give an expected timeframe for replying, which on average would be under 7 working days.

Mrs W then said that she had phoned Ms Bush at Wheelchair Services that morning (great preparation) and that she had told her that Wheelchair Services automatically sends out a confirmation email when an email is received.  I then stepped in and pointed out I rarely received confirmation emails and that the ones I received didn’t seem to be automated and usually didn’t specify timeframes, my RGN backed me up on this too.

From there things went downhill for Mrs W as basically her complaint was blown away, I had got people to phone Wheelchair Services and emailed them myself mainly to ask if my emails had been received and when to expect a reply.  Mrs T apologised on behalf of NHS Gloucestershire and told Mrs W to check the system as it obviously wasn’t working, personally I doubt such a system is even in place, Mrs W also kept pretty quiet every time it was mentioned a timeframe should be given.

So despite my initial apprehension and stress everything turned out okay, I should receive confirmation of email receipt within 24 hours, enquiries should be answered within 7 working days and I should be given timeframes for replies, this is basically what I asked for in my counter agreement, so why bother with a meeting which wasted time and NHS resources when things could have easily been sorted out by email or telephone?  I have no idea.