At the beginning of the year I had my annual wheelchair service, a fault showed up with the power module.  I have been having wheelchair issues for several years with the odd cut-out.  The chair would always work again after switching off and on again though.  This time I was warned it would fail completely at some unpredictable point.  I could be left stranded in the middle of nowhere!

A New power module would cost over £700, not the kind of money I have.  I already had someone coming to fit a new tray for my chair.  They said they’d swap the power module with a refurbished one to test if that was the issue.  Then they would get in touch with me in a couple of weeks to see how it was doing.

All sorted right?  Not quite, I didn’t hear from them afterwards which was a little strange, but the chair didn’t seem to be cutting out so much so I wasn’t too worried.  Then as I was about to go out for a trip to a museum the chair cut out.  I switched it off and on, after several attempts it worked, then cut out again.  Something was definitely wrong, I could also hear a click coming from the power module before it would cut out.

We rang the wheelchair supplier and tried several things he suggested, they thought it could be a damaged cable.  The next phone call was to the local wheelchair shop, to see if they could do anything.  They ran a diagnostic and checked my cables.  Their conclusion was that it was the power module, I couldn’t risk going out.  The chair was finally fixed on Monday, after a week of many phone calls and the chair going back and forth to the shop.

During the week I was stuck in bed, my anxiety and depression started really kicking in.  I was scared my agoraphobia would return too and wasn’t particularly pleasant to be around either.  Not rude, just very antisocial, I threw myself into processing old photos to try to focus on something.

I have no backup wheelchair, this wheelchair was secondhand and is now at least 9 years old.  Issues are beginning to occur more often now.  At some point the chair will need replacing, I need to get ahead of that.  My physical and mental health will suffer should I be left without a wheelchair.  So I have decided I will start making enquiries soon, followed by fundraising.  This chair will become my backup chair, if it’s still working by the time I get a new one.

My last fundraising was very hard work, it was before sites like JustGiving and GoFundMe but I was supported by many amazing people, friends and charities.  I learned to value my community and realised how much people actually care, it really opened my eyes.  Since then I have tried to give back to the community by working with charities and in other ways.  Some people say I have become a completely different, better, person.

I have spent this week testing my wheelchair as much as possible, looking for faults.  I started Monday afternoon by taking the dogs on long, but local, walks.  Tuesday I went to our first real “Mind Over Aperture” photography group, we met at the always welcoming Museum in the Park.  I think this started the anxiety and depression receding, being with friends, my camera and practicing mindfulness is a big help for me.   I didn’t get many good shots, perhaps in part due to my state of mind.  But I did enjoy exploring Stratford park and being with friends.

As the afternoon was sunny I decided to push myself, and my wheelchair, a bit more.  I headed to Slimbridge, Mum had gifted me membership the night before.  I was able to relax a bit for the first time in a week and could feel the tension easing as I snapped away.

It was a good afternoon and I stayed until closing at 5:30 PM.  Then, as the car park isn’t locked until seven, had a quick wander to the nearby canal to suss out accessibility.  It looks pretty good so I have added it to my “places to explore” list. 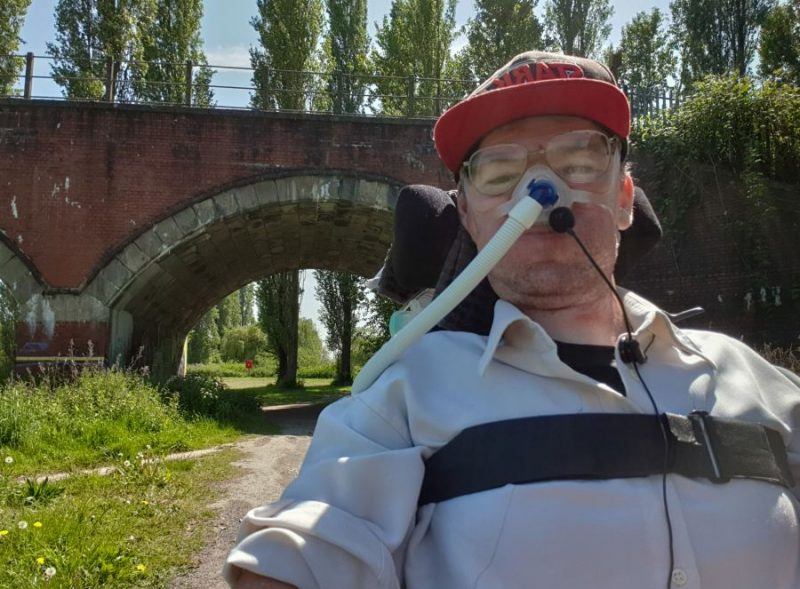 Wednesday morning I was supposed to be attending my Mental Health Workshop group at Barnwood Trust.  I really wasn’t really up to it mentally and needed more time to just relax and clear my head.  Instead I decided to wander Gloucester’s canal paths.  This wasn’t really successful as we ended up wandering all over the place, it was nice though.

I was pleasantly surprised to find the stiles, usually a bane for wheelchair users, had a hole for Radar keys, meaning they could be fully opened to let a wheelchair easily pass through.  I spent hours wandering, it was almost like exploring a secret place beneath the city itself.  There were fields full of cows, small lakes, old aqueducts and interesting trails with barely a sole about.

Eventually we headed back to the car park and then drove to Barnwood Trust’s Manor House.  I had been invited by Barnwood Trust to a special showing of the one man play, Statements, being held for some of the staff and trainers.

The play featured Samuel Clayton playing several characters, he bounced around seamlessly swapping between Characters.  Sam didn’t miss a beat, he performed for a solid fifty minutes with no mistakes or loss of energy.  Afterwards we had chance to have a chat and Q & A session with him too, a great guy who seems to want to show that their are problems with the system, but in a thought provoking way and not a confrontational one.

He touched on many themes which resonated with us all.  Although on the surface the play is about the education system it’s more than that.  It shows individual struggles, that most people are trying there best under difficult circumstances and that no one person is to blame for a system that is failing people.

He teaches us to look beyond the surface.  Something that is important to everyone, especially those with a physical or mental health condition.  The education system is just something that Sam is familiar with, this enables him to put on an accurate and interesting play.  The themes he is really addressing are far wider.

What Sam is doing is something I don’t think I could ever do.  Watching him showed me that would not be my route.  But that’s okay because I’m “me” I can be different to him, it doesn’t make either of us less than the other.

I was extremely lucky to get my part in Requiem, something I’m ever more grateful for every day, I gained a family I will never forget, and hopefully always have.  I may not be good at it or earn huge amounts of money, it’s not about that, there’s something special about acting I can’t put into words.  All I do know is I want to experience more of it.

I need to learn a lot, I need to watch more plays, like Sam’s and Brendan’s, I need to go for opportunities where I see them, whatever they are.  I may get nowhere but there’s always that small chance, as a wise man once said “The juice is worth the squeeze” (yes I’ve been watching some of my old film collection).

Finally this week I visited Croome, I haven’t managed to get there since a cold day in February.  It’s another of my go to places, with lots of interesting things to see.  Although you can probably walk round in a couple of I decided to stay the whole day and just relax.  I took a few photos, looking for interesting things and also focusing on the Mind Over Aperture groups focus this month of “peace”.

I’m currently focusing on peacefulness I think as this is what my body and mind need.  I will try to expand that a bit more and look for other meanings I can express in my photographs.  My friend Sam takes amazing photographs of peaceful protests, I’m not sure I have the confidence for that but it’s something I think would fit the theme well.

My photos were more random than usual I think.  I took some time just aiming at a grotto wall trying to capture an iridescent fly, sat for twenty minutes watching a swan preening itself and  managed to look down to the ground to capture a very obliging Butterfly (or maybe moth I don’t know).

Thank you @gloucestershirelive for covering my story for #mentalhealthawarenessweek This article describes how my business, Look Again, has developed as a result of my mental health challenges a few years ago. Please read for a positive story of how my ‘breakdown’ became a ‘breakthrough’ and how I’m now using mindful photography for helping others to improve their mental health and wellbeing, working with charities, businesses, schools and @glos_county. Thank you @baker99uk for the lovely portrait. #mentalhealthawareness #mentalhealth #mentalillness #mindfulness #mindfulphotography #wellbeing #artsandhealth #photography #photographer #therapeuticphotography #lookagainphotography #lookagain #stroud #gloucestershire

This leads nicely into mentioning my teacher and friend who taught me these techniques.  Ruth has recently been in the local press talking about mental health and how she uses mindful photography to help herself and others.  I am humbled to say that the profile picture she chose for the article is one I took last year.  Ruth was kind enough to help me with portrait photography too, something I really struggle with.

2 thoughts on “Wheelchair Issues and Recovering”