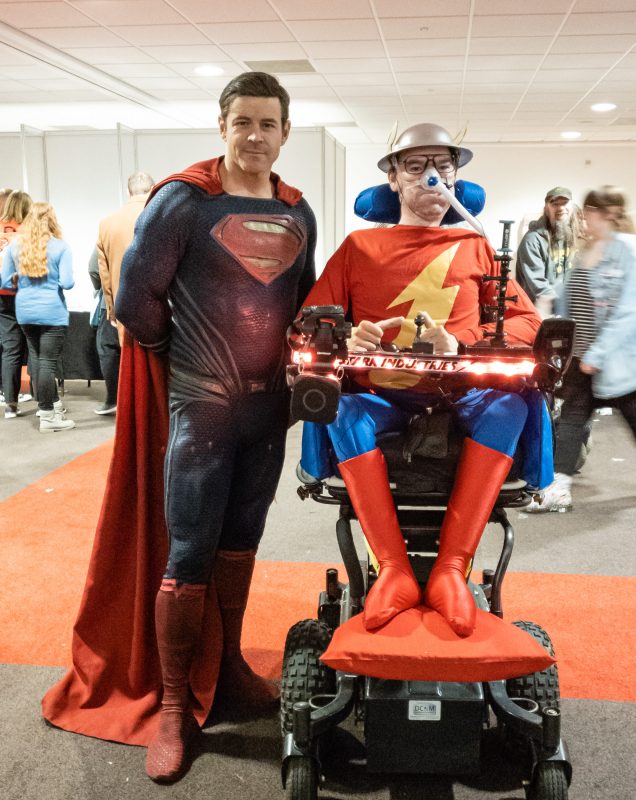 Although it’s called “Wales Comiccon” this year it was held in Telford, it actually suited me better though as it’s closer.  The guest lineup looked great, with lots of big celebrities, quite a few I hadn’t met before.  Having a limited budget I decided on just three photos, Clare Kramer, Emma Caulfield and Erica Durance.

I was a little nervous before going.  From looking at Google Maps it seemed like you needed to use a lift to get to the entrance.  I’m not a fan of lifts, also my wheelchair is quite long, if the lift is small I just won’t fit.  Deciding on my costume was also tricky, not knowing the venue well.  It can either be really hot at these places or ice cold.  I ended up choosing my Jay Garrick cosplay as it fully covered me, but wouldn’t be too hot.  It worked out okay, I was a little too cold but managed.

We left just after 7:30 AM for Wales Comiccon 2019, giving us spare time for traffic, or getting lost.  Arriving in plenty of time we were able to get a parking space easily.  I was also able to do the last minute touches on my costume before going in without rushing.

The lift from the car park was one of those silly small ones where you have to keep the button pressed to make it move.  These lifts make no sense to me.  Most people in wheelchairs either aren’t going to have the strength to hold down the button, or won’t be able to twist their body to actually reach it!  We managed though and were ushered in by friendly staff without having queue. 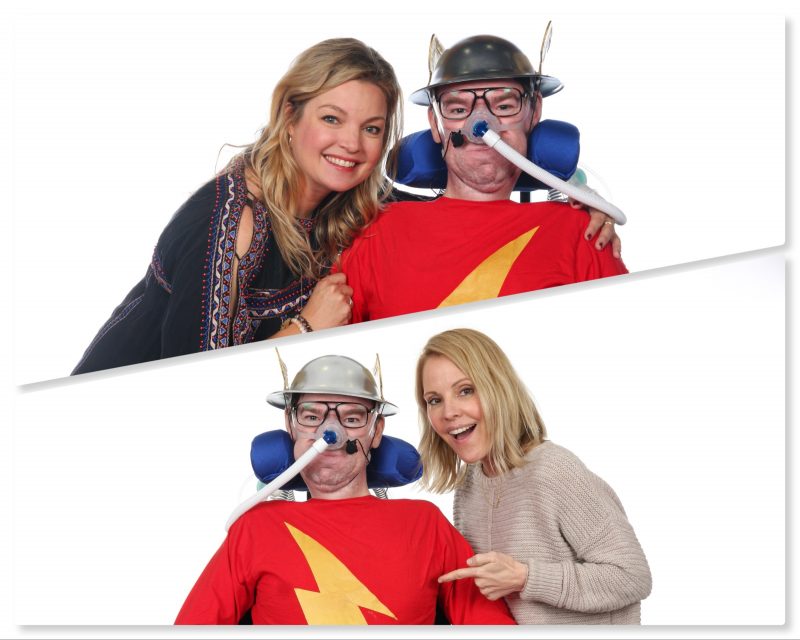 The first thing I had booked was a photo with Clare Kramer who played Glory on Buffy the Vampire Slayer.  Brandon Routh was there when we arrived, so it was pretty cool being able to see him again.  Clare was lovely and I got my picture quickly before having to rush to my second shoot.  Next was Emma Caulfield, Anya on Buffy, she’s even prettier now than when she was on Buffy!  She recognised my Flash outfit so is obviously a totally cool person too.

After this we had quite a long break before my final photo, so we wandered round for a bit.  The venue was big but it was still packed.  This is not what I am used to on a Sunday at this type of event.   Hoping it would be a little less busy, I decided I’d go upstairs for a talk.  The talk hall was huge, but pretty much full, the staff let me sit right at the front near the stage, much more relaxed than many other conventions. 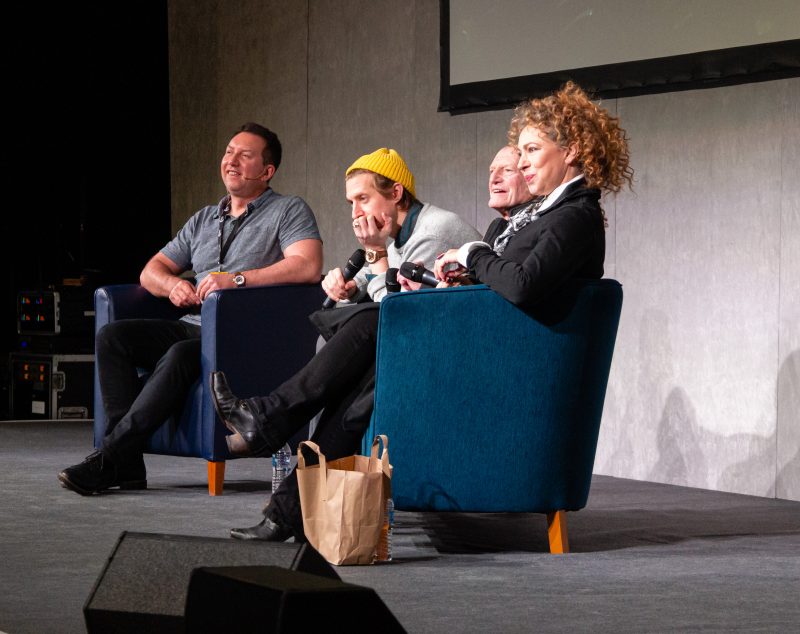 The talk was about Dr Who.  Alex Kingston and Arthur Darvill were being interviewed, with David Bradley joining later on.  I think this was the most energetic and amusing talk I’ve been too.   Alex was jumping around, telling jokes, like kneeing Dr Who between the legs in their first scene together, and throwing bananas at people!  I’m pretty sure if there were any health and safety staff there they would have had a panic attack.  Alex was full of energy, Arthur looked slightly nervous, he was probably scared she’d throw a banana at him!  The talk culminated in Alex grabbing several audience members and getting to sing the Dr Who theme tune.

The crowd leaving the talk was tight, I had to really focus to keep from running into anyone, moving an inch at a time.  Having a wheelchair elevates so I can see above peoples heads is a godsend.  While I was fully concentrating on this I felt someone squeeze my arm.  An american then said “Hi, I don’t know if you remember me…”, I looked round into the eyes of a tall, rugged man, “I’m Zachary Levi, good to see you brother”.  This I was not expecting, I managed a quick “Hi bro” as he was moved on with the flow of the crowd.

After this moment of, “wtf, I just saw Zach AND he remembered me!”, we made our way back downstairs and explored again.  I had lots of people stop me to take pictures and say how brilliant my costume was.  I enjoy this as nobody actually cares I’m in a wheelchair, with a ventilator mask on my face, they are just happy to chat and have a photo and don’t feel uncomfortable.

Later in the day I decided I’d get an Autograph from Zach.  There was quite a queue so we didn’t get chance to chat, but I got a cool fist bump before having to make way for the other fans.  I also got to see Michael Rooker who was sitting nearby and hear that deep voice, he sounds exactly like Yondu!

Then it was time for my final photo, Erica Durance, Lois from Smallville.  We had to wait a while, but this meant I could watch people getting photos with Laura Vandervoort and Tom Welling.  I decided to be vain and take my glasses off for the shoot with Erica.  Not my smartest move in hindsight.  I barely managed to avoid running the lighting wires over.  Then when I turned the chair to straighten up I ruckled the paper on the floor of the photo area, oops.  Erica was bending down trying to straighten it and telling me to move forward or sideways.  I’m not sure the crew wanted her doing any work like this and quickly got her to stop, saying it was fine.  We got a great picture together and I decided I’d get her autograph afterwards. 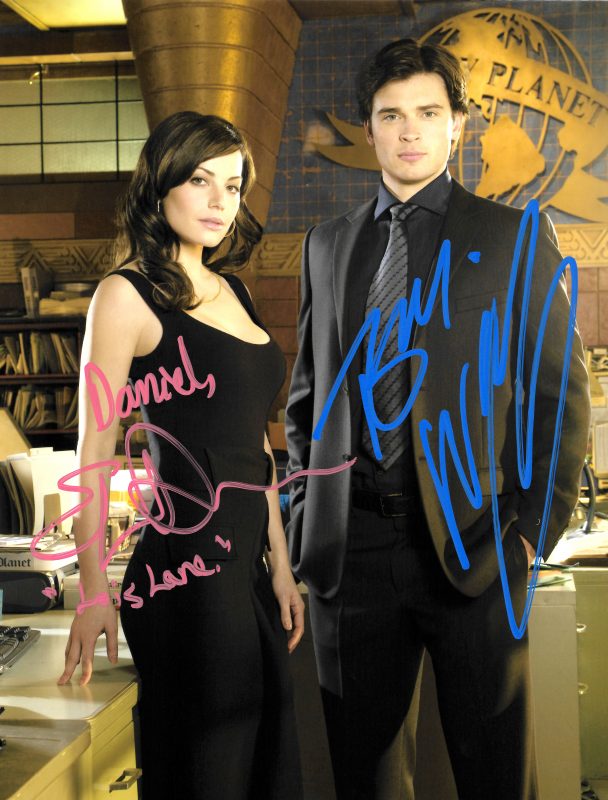 Returning to the main hall, we looked round quickly then joined Erica’s autograph queue.  While queuing Tom Welling, Clark on Smallville, must have seen me, as his agent came over.   He said “Tom wanted you to have this for Erica to sign” it was a photo of Tom and Erica that Tom had signed, what a nice guy.  I didn’t get chance to thank him personally as he still had quite a queue.  Both Tom and Erica stayed on until they had signed everyone’s pictures, even thought it was after closing time. I’ve not seen this happen anywhere before, most celebrities leave well before the show closes.

The trip home from Wales Comiccon 2019 was reasonably uneventful, except for the fact Google maps took us back via A and B roads.  The bumps and turns really cause me to ache.  We found out afterwards that there had been two major crashes on the motorway, so thanks Google, we could have been in trouble if you’d taken us the other route home.

Wales Comiccon exceeded my expectations.  Being recognised by Zach, and Tom giving me his autograph, really topped things off, genuine human kindness is very touching  and something you never forget.

Yesterday after a stressful start to the day I spe

If @SamsungUK would like to give me an S20 Ultra I'll accessible blog the hell out of it, especially the camera side #GalaxyUNPACKED2020 #ICanDream #Accessibility

Finally a phone that is as good as the Nokia 808, guess it's not using Zeiss optics though #GalaxyUnpacked

Flip phone not really appealing to me, I used to like clamshell phones though

Yesterday after a stressful start to the day I spent the afternoon in Wales, visiting Raglan Castle then Cardiff ift.tt/2UrruCC pic.twitter.com/FfBg…