Home - Blog - The Price and catching up with Brendan Coyle

A couple of months ago Brendan Coyle sent me a message to say he would be appearing in a play in Bath, The Price, and did I want to catch up with him?  It was July 2017 when we filmed our scenes together for Requiem so I was very eager to see him and have a catch up.

Brendan is playing the main character, Victor Franz, in Arthur Miller’s The Price at the Theatre Royal in Bath, I hadn’t seen the play before and don’t to spoil it for anyone else so will just give a brief synopsis here.

The Price is basically about family relationships and how people see and act in different ways to the same circumstances, it is set in an attic where Victor is selling off his father’s old possessions, Solomon, a furniture dealer played by David Suchet, provides the much needed comedic element to a play which can become very heavy in places.  The play stands the test of time well, I guess economics, governments and family relationships don’t really change much and are universal constants, all the cast were brilliant, Brendan and David especially bounced off each other well and you could sense the friendship there.  Definitely worth seeing if you can get tickets!

The Price set, an attic full of stacked up furniture

As some of you will know I’ve had issues with care staff reliability recently, there have been good reasons but it meant when planning a day out like this I needed to have back up plans in place.  I checked train times from Cheltenham to Bath so that if I couldn’t get care cover, or was let down last minute, I’d still be able to get there.  It quickly became evident that trains in the late evening wouldn’t work, the latest one included a bus for part of the route which wouldn’t work for me at all.

Due to all of this I decided on a matinee, they are only on Thursdays and Saturdays so this limited choices more, I decided on afternoon of Thursday the 16th of August and got Mum to ring the theatre to book, as with a lot of places you can’t book wheelchair spaces online as they need to know any specific requirements.  We got four tickets for the Royal circle, in the end we ended up only needing three as we couldn’t get a carer who could stay for the performance, they did manage to pick us up and drop us off though so luckily no trains! 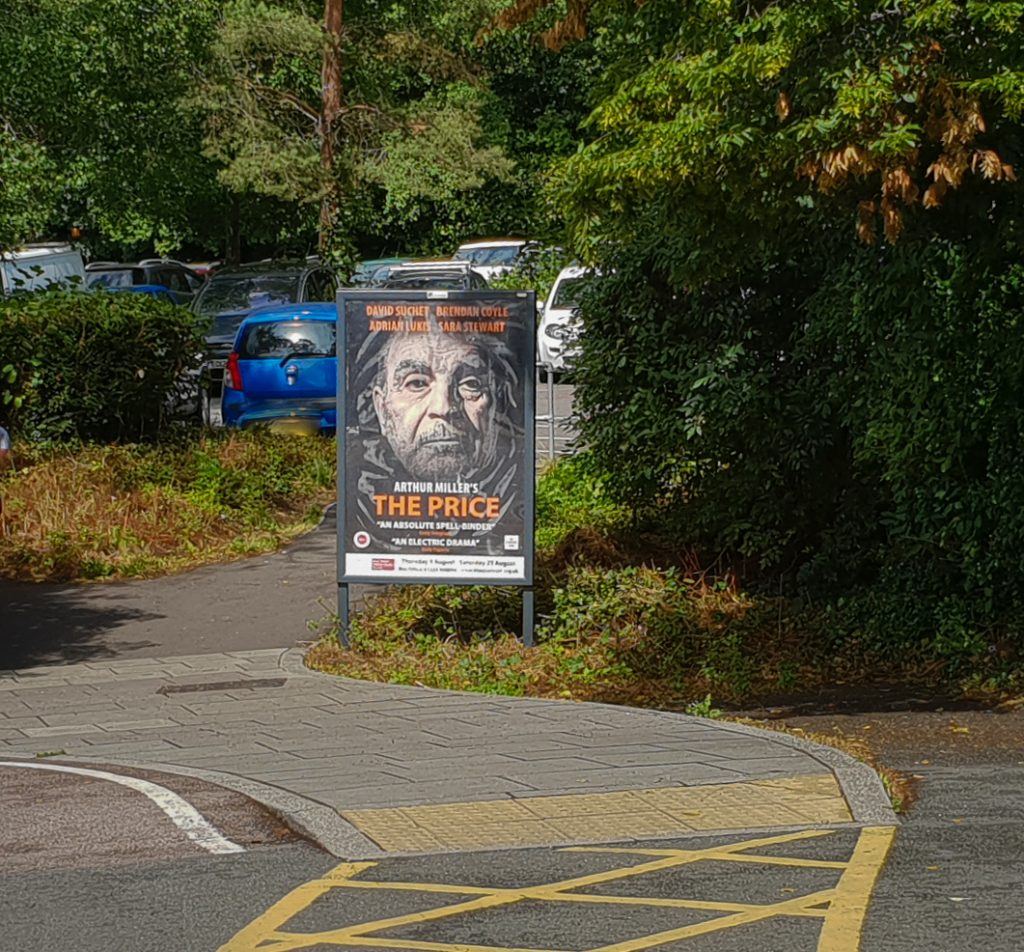 We left at half ten arrived around twelve, Bath traffic always seems bad.  It was about a ten minute walk from the car park to the Garrick’s Head where I was due to meet Brendan, it would probably have been quicker but Bath isn’t really very wheelchair friendly, I had to use a bicycle lane in the road at one point due to a lack of drop kerbs.

The Garricks’s Head has seats and tables outside with parasols, which is lucky as there is no wheelchair access to the inside of the pub itself.  We chose a table in the sun and waited for Brendan who arrived at about one pm with his friend Joy, we had some drinks and a chat, then he was asked to sign some autographs by a group of fans, he’s a great guy so was quite happy to do so and apologised to me for popping off.

When he got back to the table David Suchet was chatting to a family at the next table so Brendan asked me if I had an autograph book then got David to come over, sign my book, and say hi.  David is another really nice man who was happy to do so.  Brendan had to go and get ready for the play at this point so we stayed and chatted with Joy for a while who is a really lovely and friendly person.

Chatting with Brendan while David signs my autograph book

The theatre itself is very old but access wasn’t too bad, the lift isn’t huge but has glass doors so you don’t feel too claustrophobic and is fast so we were up to the Royal circle in less than a minute.  The staff were very friendly and helpful, they guided me to my space which had a great view of the stage, unlike Cheltenham’s Everyman where I couldn’t see half the stage due to a large pillar being in the way.  The space was easy to get in to but reversing out required some skillful manoeuvring on my part, although this may have been easier if Mum hadn’t had a whisky and coke beforehand and had guided me better! 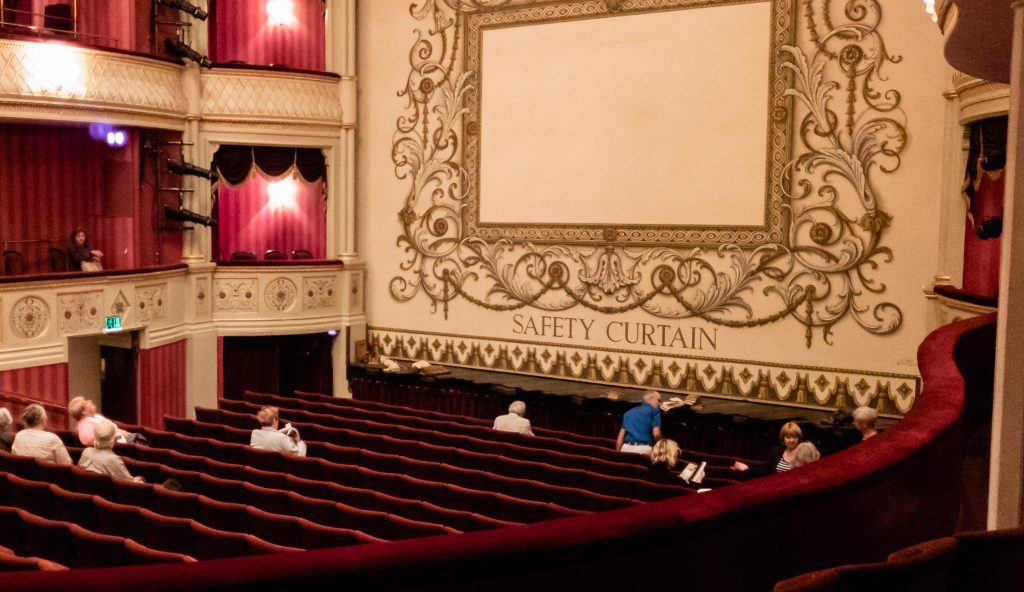 The view from the wheelchair space in The Royal Circle

Brendan was on stage for pretty much the whole two hours and forty minutes, with a fifteen minute interval which I’m sure he needed.  I was amazed that he could remember all that dialogue and perform without one mistake, it’s a very impressive feat, especially as he’s performing with a broken arm!  That just shows how dedicated he is as an actor, he made no fuss and you couldn’t even tell, he must be in a lot of pain but barely even mentioned it when chatting with us, one tough man.

After the show we met up with Joy again while Brendan got changed and wound down, she said a quick hello to Adrian Lukis, who plays Brendan’s brother Walter in the play, as he walked past and introduced us, he hadn’t seen Requiem so was firmly told he needed to watch it before Brendan found out.

Brendan caught up with us again shortly after and we had another chat, he thought the audience were great and we all told him how good it had been, I imagine that’s something very different to TV and film work where you get no feedback at all.  We said our goodbyes and that we hoped to meet up again soon, then he headed off to grab some food and a nap before the evening performance. 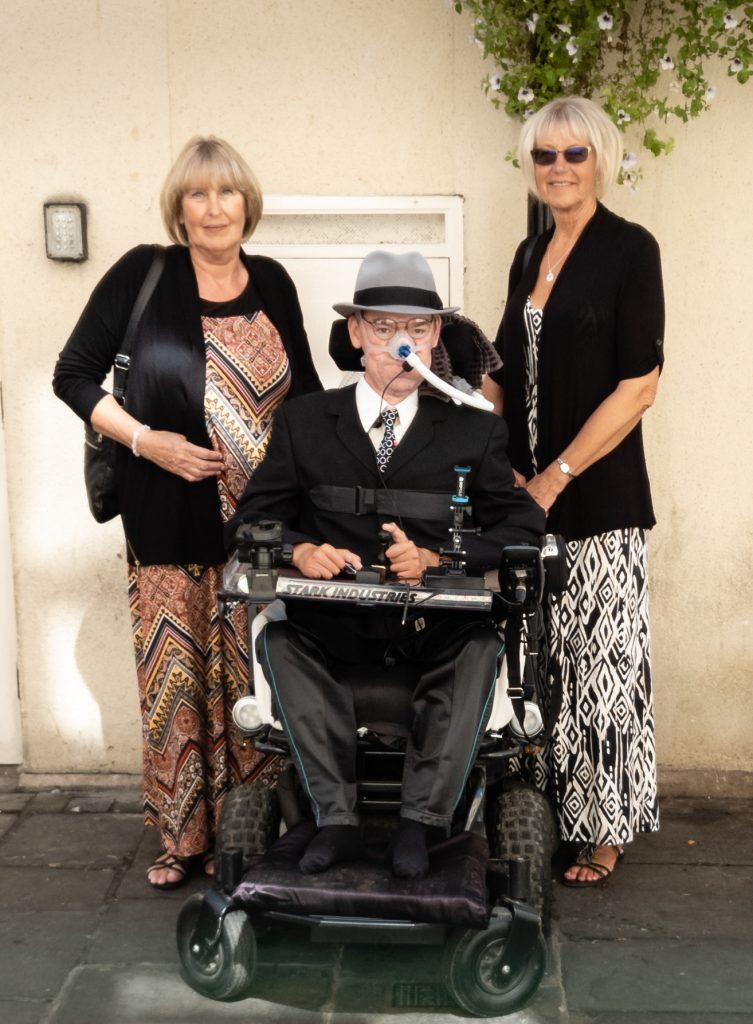 Mum, my Aunty Jen and me before watching The Price

It was a very special day, going to the theatre is always something special, and not something I do often, and to meet three out of four of the cast made it even more special.

Just catching up with Brendan was brilliant, it had been so long, and honestly I’d have travelled to Bath for that alone.  Requiem, and the family I made by being part of it are still a big part of my life, I’ve heard no news on a second season but if the opportunity does arise I would love to reunite with that team, I’m also more than open to any other small acting parts, just get in touch!