Daniel Baker, his Mother Julia Baker, The Mayor of Gloucester, CEO of MDUK and The High Sheriff of Gloucestershire (photo by Robert Meadowcraft)

I met Charles Martell, The High Sheriff of Gloucestershire, at the end of October while helping support the Forest of Dean branch of MDUK launch their promotion of the annual Spirit of Christmas concert.  Little did I know he’d end up presenting me with The High Sheriff of Gloucestershire Award in recognition of great and valuable services to the community at the pre-concert VIP gathering just before the concert begin this Tuesday!

I had a nice chat with Charles during the promotion, although it was difficult to be heard over the noise in Gloucester Cathedral cloisters at times, he seemed a very nice man with a genuine interest in Muscular Dystrophy and myself.  Afterwards I looked up his biography online I saw he was a pretty amazing guy with an interesting life, he had even worked at WWT Slimbridge, a place I really enjoy visiting.

Daniel Baker,a picture of him and with Stan Lee in the foreground (Image: Kevin Fern Photography Ltd)

After this I did an article for the Gloucester Citizen, to help promote the concert, I opened up a lot and admittedly was slightly nervous as I don’t find it easy to share some things, especially achievements.  I needn’t have been concerned though as Kim wrote a great and very positive article, the local press have always been pretty amazing with me and have learned not to focus on negatives or use pity in what they produce, something larger media organisations could learn from.

The day of the concert I wasn’t sure I would actually make it, I had developed a bad cold last week, I started to improve for the weekend and attended comiccon, I think that pushed my body a bit too much, I’m not really Superman even though I may cosplay as him, and by Tuesday I felt awful.  But I hadn’t missed this event for years and had no intention of letting them down, I forced myself out of bed and after some adjustments to my mask and checking my Oxygen saturation wasn’t too bad set off.

Speech read by The High Sheriff of Gloucestershire

Everyone was pleased to see me and as welcoming as always, we headed up to the VIP area and I had a chat with a few people including Charles and Robert Meadowcraft, former CEO of MDUK, then Charles stepped forward asking for silence as he had an announcement to make.  My Spidey senses started tingling at that point, he then looked to me, read a lovely presentation and handed me The High Sheriff of Gloucestershire Award in recognition of great and valuable services to the community!  I stayed focused on him rather than looking at the crowd around, I think my emotions may have got the better of me had I looked at everyone’s faces, all I really managed to say was thank you I think, it was so unexpected and everyone involved had done a great job of keeping it secret, even my Mother didn’t know.

The concert itself was lovely as always and marks the start of the Christmas season for me and many others, with beautiful singing by school choirs echoing around Gloucester Cathedral, lovely and sometimes amusing readings by both dignitaries and school children alike.  Catherine Woodhead, the new CEO of MDUK, rounded things off with a lovely speech at the end, mentioning me more than once, and letting everyone know why MDUK does what it does.

I don’t think of myself as anything special, I find it hard to accept praise without trying to make a joke about it, but this was a real honour, to be appreciated and have that acknowledged on behalf of the entire county makes me feel like I have worth and am a useful member of society.

I really appreciate what Charles did, I expect the Forest of Dean MDUK branch and Gillian the regional developer, who has now sadly left the charity, also had a lot to do with me getting the award too, so they also deserve a great big thank you. 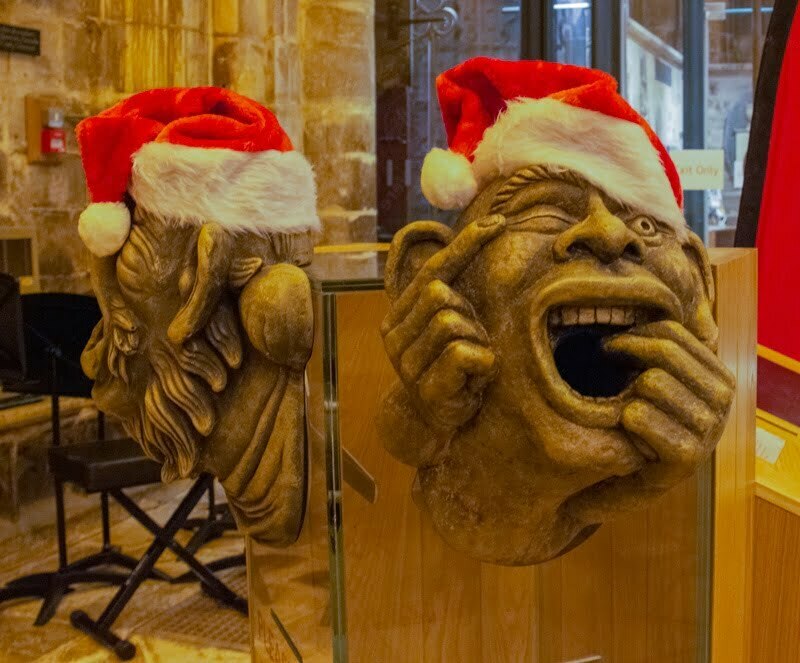 You can see some amazing photos from the concert on Gloucestershire Live, sadly we were asked not to take any photos ourselves during the concert so the only one I took was of the festive Gargoyles above.

And now the award is also listed on the High Sheriff of Gloucestershire’s website too.