I don’t really like talking about my past and writing this post makes me a little nervous if I’m honest, but I have thinking about my teenage years and how it shaped who I am today quite a bit recently and perhaps that means it’s time to share.  It’s a rather rambly post, this is somewhat intentional as that is the way my memories work, so apologies in advance.

When I was about twelve my Mum met a man, he seemed okay, I was never a fan of my Mum’s boyfriends and our family had misgivings but he was what she wanted and I was her son and always knew it was my duty to stay with her as my Father didn’t.  There was an argument when I was thirteen which caused Mum to move in with this man, I felt I should go with her so we ended up in temporary housing for several months, during this time things began to change and my protected, loved life as a child was turned upside down.

There was an argument between my Mother and her boyfriend, my younger cousin was with me, it turned violent, my Mother told my cousin to call the police, I think he was about ten at the time, he ran to find a phone box and call the police.  When the police arrived there was little they could do, Mum’s boyfriend was a master manipulator and convinced them it was a misunderstanding, he apologised to Mum and they were back together.

We moved in to a bungalow after the temporary flat, it was a nice place, I got to know my Mum’s boyfriend’s daughter Tina, we became close even though she wasn’t the type of person I’d ever mixed with before, she was perhaps three years older than me, pregnant and smoked drugs (never around me).  She brought me out of myself a bit, I remember we visited a big furniture store with her hugely pregnant pushing me in my wheelchair around at high speed laughing and joking, it must have been a strange sight.  She had her baby, he was tiny and named Nathan, but things didn’t go well, I heard Mum answer the phone one day, I instantly knew something was wrong, the hairs on my neck stood up and I went cold, after the call I was told Nathan, a beautiful, innocent baby had died in his cot.  I remember the funeral, a tiny coffin lowered into the ground, his father broke down, tears flooding, he was shouting and kneeling by the hole in the ground, such pain.

The arguments started again at the bungalow, getting more violent, I would lay in bed listening, scared, they usually happened at night and usually after he had had some drinks, this made me feel more alone I think.  We were manipulated away from contact with my family, lies were spread and Mum gradually brainwashed.  I had never liked school, but it became a better place than home and I barely missed a day, I had a couple of best friends and other friends who I wasn’t that close to at school, I had always been shy and found socialising awkward, but it was good, it was my school life and I knew everyone.

I’ll mention some of the big arguments I remember, early on Mum tried leaving, we stayed with one of her friends, hiding in her living room during the day, Mum’s friends brother would come at night and carry me up to bed, it was kind of him but I felt uncomfortable, I had to trust a man I didn’t know to not drop or hurt me, I was carried like a baby which meant I was also really close to him, I hated it, but I didn’t complain about anything and I supported Mum completely.  It only lasted a few days, he convinced her to go back to him, to take me back to an unsafe place.

I remember another night, I’d been left alone while they went to the pub, Mum rang and said they had had a fight and she wasn’t with him, he came back shortly after asking if I knew where she was, I didn’t which is probably good as it meant I didn’t have to lie, then the police came, they took me and I had my first ride in a police car, we collected Mum and went to a woman’s shelter in the next town.  I remember a big room with several beds in an old building, bare, the heating didn’t work and I had thin sheets, it was a cold, long night.  The next day I was left with the other women while Mum went and talked to her boyfriend on the seafront, by that night we were back in the bungalow.

Tina got pregnant again, her boyfriend was now in prison for aggravated burglary, I attended his sentencing and visited him in prison, not something every teenager does and not something I’d recommend, but it was interesting.  After her baby was born she stayed with us a while, the baby had a breathing monitor, they were extremely unreliable and would go off several times a day, I would babysit and even feed him, it was a good time among the bad, he survived and was healthy.

Another argument led to Tina’s boyfriend being sent by Mum to collect me, my Mum’s boyfriend wasn’t happy, I remember one of them telling me to put my coat on, the other telling me not too, a fight broke out, I could hear one crying and saying he didn’t want to hurt the other and see them struggling with each other, when it ended Tina’s boyfriend left.  The police arrived next and I was taken to Mum, we spent Christmas at my Nan’s before returning to the bungalow again.

Me with Tina’s second baby at my Nan’s

One of the final arguments led to Mum’s boyfriend hiding outside in the garden with a kitchen knife, if Tina and her boyfriend hadn’t stayed with us that night I’m not sure what would have happened.

When I was fifteen I had work experience at the local college’s library, on the third day Mum turned up, I was taken by her to my Nan’s house, early the next morning we were on a train to Gloucester, paid for with a cheque that would bounce.

We arrived in Gloucester on one of the hottest days on record, we had no money and only the clothes we were wearing, we went to social services, who weren’t overly happy but they gave us some money out of petty cash so we could get some food (a McDonald’s which we ate in the cathedral gardens) and get me a t-shirt as I was wearing a jumper.  We returned to Social Services a bit later and were told they had nowhere for us, but there was a unit for disabled people learning how to live on there own in Cheltenham, we could stay there. 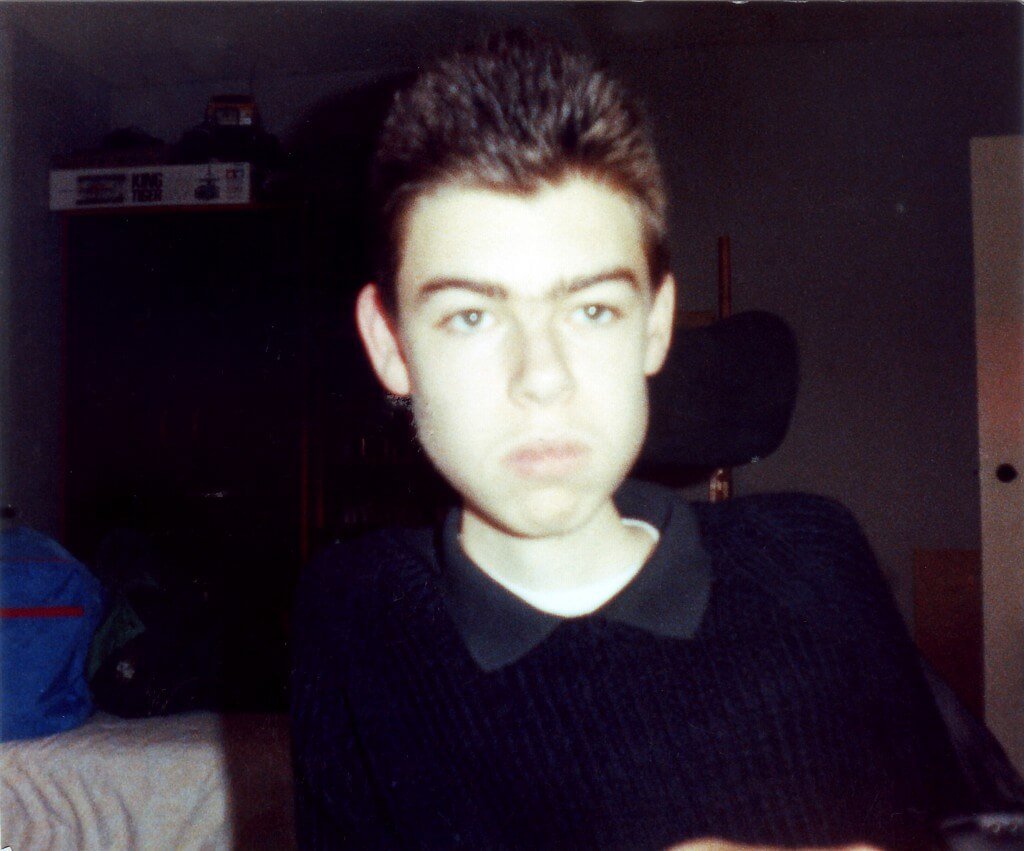 This was our new “home”, Cheltenham, we spent a while looking over our shoulder’s, having social services try to convince us to return to Hastings and living in temporary housing, I changed my surname for school to Kent to make it harder for Mum’s ex to find us, the only person I told was my best friend from Hastings, no one else from school would know what had happened, I just vanished.

Cheltenham wasn’t a bad place to end up, it will never be my home, I knew on that morning when we left Hastings that I would never have a home again, but at least I never had to sleep with a knife in the draw by my bed anymore ‘just in case’.