It has been about eight years since I have been well enough to travel to see my consultant at the Royal Brompton, that time I had to travel in an ambulances due to severe panic attacks, it wasn’t a pleasant experience and when there it was just a quick sleep study and back home the next day.

Hospital room with a view

Hospital room with a view

My panic attacks seem to be under control now and I have been reducing my Diazepam and Seroxat as well, I really don’t like being reliant on medication, don’t get me wrong it’s not that I’m ashamed, I think using any tools available to help with medical conditions is a good thing, be it therapy, medication or anything else that works, I just don’t like taking medication, never have, and now they’ve done there job it’s time to come off, slowly (never come off drugs quickly and consult a medical professional first).  Anyway I digress, the point is I’ve been able to travel more and felt confident I could manage a journey to London, so I emailed my consultant about three weeks ago, she replied within an hour saying she would be happy to have me in for a few days to give me a full check up, and would the 20th of January be okay?  I was rather surprised it was so soon, I’d expected a few months to prepare but I wasn’t going to turn the date down.

So I had a manic couple of weeks organising things, unfortunately my PA couldn’t come as her husband had to work overtime and couldn’t look after their children for that amount of time, this meant taking my Mother as carer, not ideal and it meant my seventy year old Aunt had to look after our dogs along with her own.  Despite all this I was looking forward to the trip and stay at the Brompton, London is my ‘happy place’, I love the people, the atmosphere and the city itself, I decided I’d definitely visit the Natural History Museum while I was there, it’s about ten minutes from the hospital and one of my favourite places.

As you can probably tell I was a little excited, the day came and I felt pretty confident about it all, as I first got in the van my anxiety levels did rise, I thought I may get a panic attack, but I decided whether I did or not I was still going, the attacks were not going to mess with my plans anymore, and after about twenty minutes the anxiety had subsided.  As we got closer to London on familiar roads (I travelled the A40 every day for three years going to university), I started smiling, feeling comfortable and even humming!

We arrived with no incidents, the journey was the longest I’d done in many years, after getting to my room we were met by a doctor who did the usual checks, I had obs taken, briefly said hello to my consultant, then was sent down for a back X-Ray and bloods, the blood taking was fairly painless, the X-Ray was more uncomfortable, getting the plate behind me while sitting in my chair wasn’t the easiest of tasks.  After that I returned to my room and got into bed, I was rather exhausted as you can probably imagine, the bed wasn’t too uncomfortable but only had controls on the side to raise and lower it, this meant I was stuck in the position somebody else set and had to rely on others to position me for eating etc. still better than a non-electric bed.  After a short relax in bed the very friendly Fatima came to attach me to TOSCA, a machine to monitor me overnight, this machine was a huge improvement from when I was last there, just one sensor which clips on your ear connected to a small quiet machine, last time I had several sensors attached including a pulse oximeter taped to my finger, this would get very uncomfortable after several hours, these sensors were attached to a Windows computer running custom software, as you can imagine this was quite noisy and not conducive to sleep.

I slept reasonably well, as well as you can in a strange room on a strange bed, TOSCA was taken away for the results to be checked, at about ten the doctors started arriving and the day beginning properly.  I was sent for a transthoracic echocardiogram, we decided I’d use a stretcher to make it quicker and easier for Mother as she wouldn’t have to help getting me in my wheelchair, in hindsight I should probably have gone in the chair as it would have been quicker and less painful for me.  The ECHO department is in a separate building a couple of roads away, I was taken across in an ambulance by two paramedics who were very friendly and stayed with me the whole time, the ECHO took a while and wasn’t the most comfortable experience, but the doctor was very thorough and competent.  On the way back to the ward they X-rayed my knee (I’d mentioned it was a little painful & that Cheltenham had taken an X-ray, but as they hadn’t noticed my fractured ankle it was decided it was a good idea to re-Xray), then it was back to the ward.

Within a couple of minutes another member of my consultants team arrived, he connected me up to TOSCA again and tried me on a new, more modern ventilator, the Nippy ST+, it’s slightly different to my current BREAS, it’s smaller for a start, but the important difference is that it has both an inhalation and expiration pressure, the expiration pressure is meant to keep your airways open but feels a little strange and makes swallowing awkward.  After monitoring me on the Nippy for about an hour he altered some settings and was happy, I was told I’d have another sleep study that night and to try and use the Nippy for as long as possible during it.  Then he demonstrated some techniques for helping me cough should I get a chest infection, again not a particularly comfortable experience, he also showed how to use an air stacking device, this seemed rather useful and actually wasn’t uncomfortable at all.

Then came my least favourite test, I had told them I get breathless coming off my ventilator for more than a couple of minutes, so I was hooked up to TOSCA again and my ventilator taken off while my CO2 & Oxygen levels were monitored, I managed ten minutes being pushed to last as long as possible, by this time my CO2 had gone up to over 7 & O2 down to nearly 90%, I was quite stressed & had a mild headache but we needed to be sure the breathlessness was physical and not psychological.

This was the last test of the day, it was about five o’clock so no time for the museum, I decided to go for a walk to the Thames instead, it was absolutely beautiful going over Albert bridge and looking down the river, one boat slowly passed then a police speedboat zoomed passed, people were doing evening runs along the embankment, city life at it’s best in my opinion.  We didn’t stay out too long, as it was my fingers were so numb with cold I could barely drive back to the Hospital, but I managed to get back before eight ready for another sleep study. 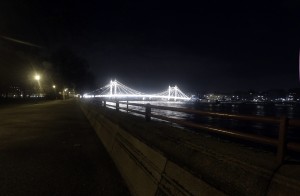 Fatima returned to connect me up to TOSCA and at about half ten I put on the Nippy and tried to sleep, it took a while but I managed to doze off, unfortunately I shortly woke up having a coughing fit, maybe it was the Nippy drying my throat or possibly from going out in the cold, whatever the reason I woke up and switched back to my BREAS.  I didn’t sleep too well for the rest of the night, I was uncomfortable but didn’t want to disturb Mum as she was stressed and tired, I let her sleep until gone eight then got the day started.

I was given my results and told to take a Nippy home and build myself up on it to eventually replace my BREAS, after the doctors had been I started getting ready to leave slowly, Mum was still stressed and rushing would have caused me more discomfort.  As two o’clock approached we were told the next person for the room had arrived, a nurse hung around to help us get out quicker and porters called to take our stuff to be taken to reception, Mum saw this as her being rushed and went into ‘hissy fit’ mode, with me bearing the brunt of it.  We got out just after two and back to the van, the intention was for me to look round the museum while Mum had a rest in the van, we headed that way but there were no obvious parking spaces so instead of having a little fun we headed home.

The trip back was uneventful, I was in a somber mood and exhausted, I had been looking forward to London, my ‘happy place’, I lost that happy feeling with the stress and discomfort of this visit, through no fault of the excellent Brompton staff I must add, as I saw Cheltenham come into view I remembered something I had thought while on the train leaving Hastings at fifteen years of age “I’ll never have a home again”, it’s true Cheltenham isn’t home, although I’ve lived in the same flat for over twenty years it still doesn’t feel like home, London used to, Hastings used to, but not anymore.

Sorry to end on a down note, getting to London was a good thing, I have been checked thoroughly and will be much safer in my health, I also achieved a long journey without a panic attack, I have proved to myself whatever I set my mind to I can do, and last night I visited the theatre with a friend, my PA did not stay by my side, I did something very normal and independent, this is a good start to my fortieth year.