Originally I signed up to the mindful photography course hoping to improve my photography.  I have always found the technical side of photography fairly easy, but hoped this course could help me be more creative too.  The course did this I think, it has also taught me to slow down, look at things I wouldn’t normally glance twice at and much more.  Before the course I didn’t really know much about mindfulness itself either, now I try to use some of the techniques I learned when I am stressed, in pain or anxious. 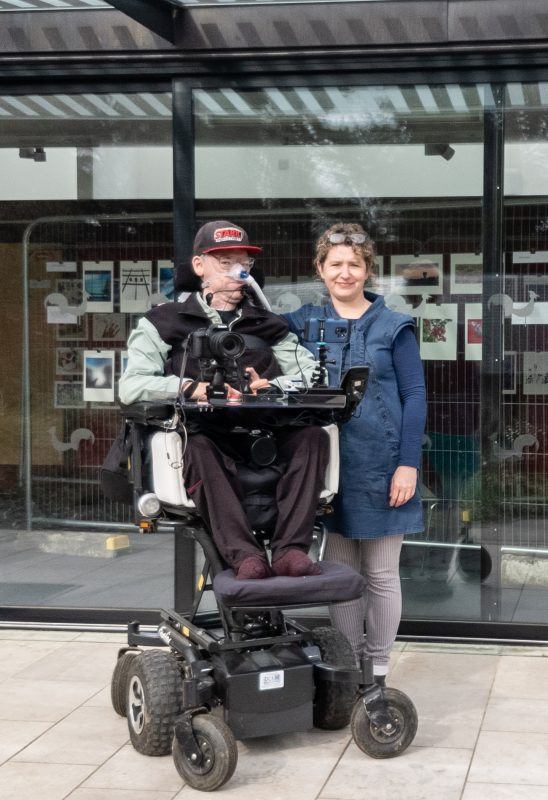 The course itself was enjoyable and interesting, as was meeting the other group members, some of whom have taken amazing photos and really inspired me.  During the course our teacher, Ruth, who won’t like me calling her that but was much more than just a facilitator to me, mentioned maybe exhibiting some of our work.  I wasn’t really sure it would happen, or that my photos would be worthy of being shown alongside my classmates, but I agreed to be part of it should it happen. 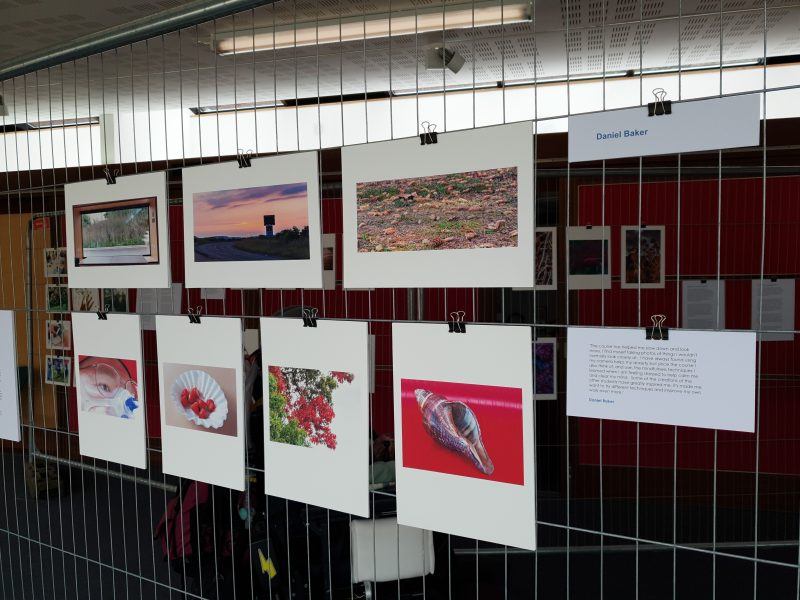 Our photography group were supposed to meet in January to discuss which photographs to display in the mindful photography exhibition, each of us submitted about twenty photographs that we had taken during the course, unfortunately I was ill the night before and couldn’t make it to the meeting.  I was extremely disappointed and frustrated I couldn’t be there, not just because I wouldn’t be part of the group discussion, but also because I had been really looking forward to seeing some of my classmates again.  The group chose seven of my photos, which were probably the ones I would have gone with too, so I agreed I was happy for them to be used.

When the day arrived I dressed as smartly as I could, I don’t scrub up that well but wanted to at least try.  I headed to the exhibition slightly early, to my surprise my photographs were very close to the doorway and could be seen even before entering.   This meant I was able to meet some of my classmates, as well as Ruth, before the exhibition opened to the public.  It was nice to have this time beforehand to relax a bit, bond and see that I wasn’t the only one who was nervous.

The room the exhibition was hosted in was also where we had the course itself, it is a lovely, one side is entirely glass and opens onto a beautiful garden. The room feels very welcoming and safe, and it also allowed the photographs to be displayed in natural light.

The mindful photography exhibition opened at two o’clock and I was surprised how many people turned up, we all did our best to interact with the visitors.  I found my nerves weren’t too bad but it was difficult to be heard and mingling near the photos themselves would have blocked people.  I met and chatted to lots of interesting people though, I was also complemented on my photographs which helped add to my confidence and lessen my nerves. 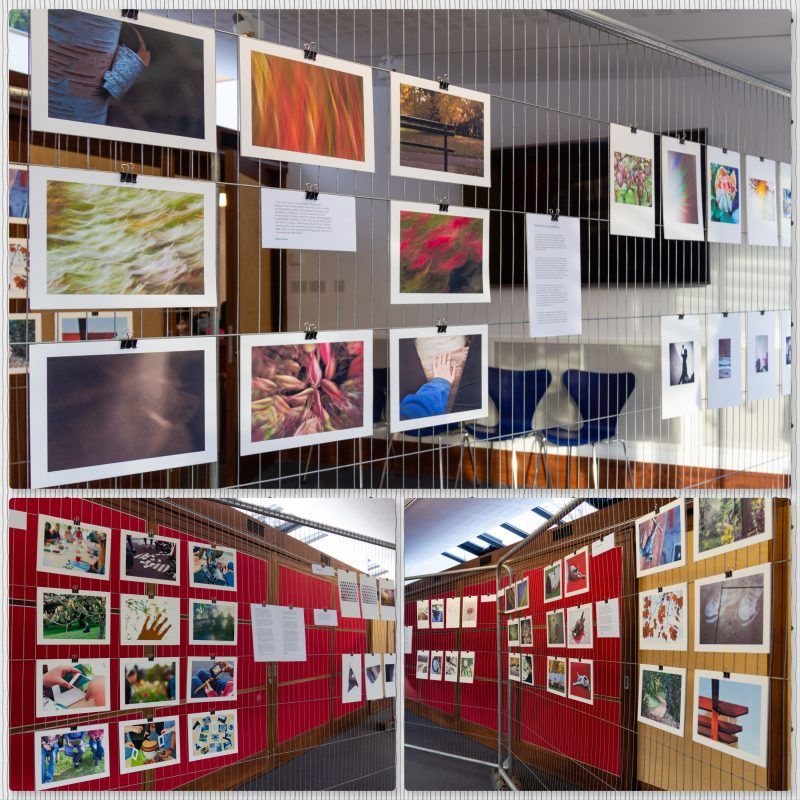 The photographs on display were all very different, but also complimented each other, there was the sense they all belonged with together in this exhibition.  I enjoyed looking at everyone’s creations, I had seen some before, but printed on high quality paper and mounted on card made them even more beautiful to look at.  There were so many different styles and techniques used, all special in there own way, we had been encouraged to experiment and break the ‘rules’ and this showed.

I returned again on the Saturday and Sunday, I would have liked to stay longer on both of these days but unfortunately my carer could only stay until five, which meant I needed to get home by four.  Both days of the weekend were still quite busy and involved more talking than I’m used too.  I enjoyed Sunday the most out of all three days, everyone was more relaxed by then and I got to chat more with my former classmates, but it was also the end of a great, if exhausting experience. 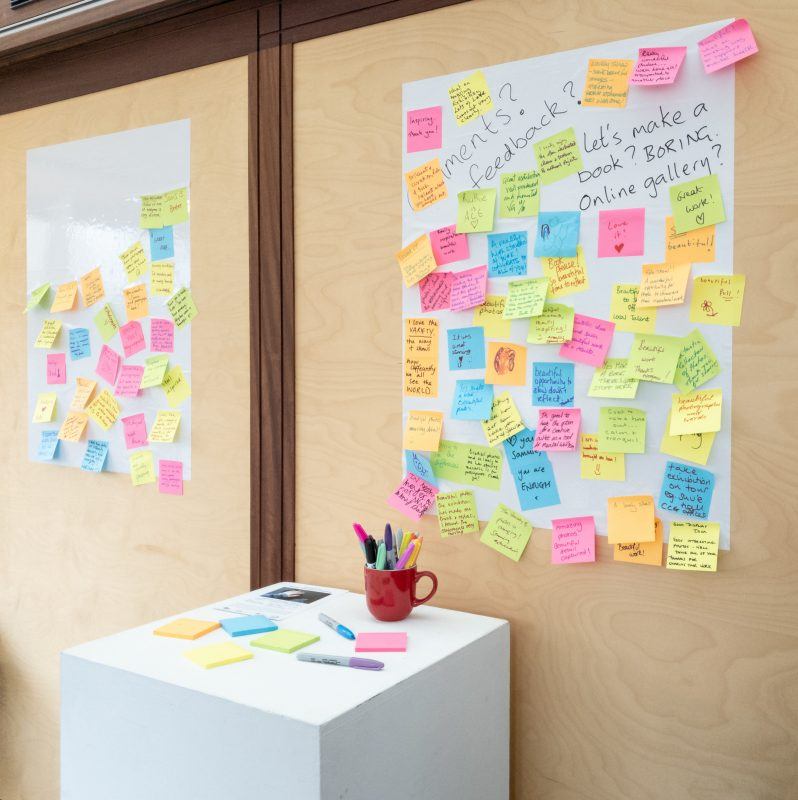 The feedback for the exhibition was amazing, we had between 450 and 500 visitors over the three days, considering this was only a small exhibition with limited publicly I think that’s rather impressive.  Ruth, Artlift and the museum itself did an amazing job organising, setting up and hosting the exhibition, I’m sure we all tremendously appreciate their efforts.

Maybe this will also be part of something more, people seemed interested in showing the exhibition in other places as an example of mindful photography, art on prescription and just beautiful photography.  I also wonder if one day I’ll have my own exhibition, I should probably sell a few more of my photos before that, but it’s good to aim high!

https://www.instagram.com/p/BumiestAj9p/
I really hope to stay in touch with some of my classmates, two I already have contact details for and I’m hoping some of the others will join a photography group we have discussed starting up.  Friends aren’t always easy to find and this group of people already have a special place in my heart, they are all special and unique people who have gone through, and are still going through, many hardships and difficult times.

The mindful photography course I attended is hosted by the charity Artlift and all you need to do to take part is to live in Gloucestershire and get a referral from some form of healthcare professional.  Ruth Davey is the facilitator (teacher) and the course is held at The Museum in the Park, Stroud.  I’d strongly recommend this course to anyone, from amateur to professional, some people used phones or tablets, others compact or DSLR cameras, all of which produced excellent results.