Today I am Looking Back to May 1st 2017 and being stuck in the van.  I haven’t posted about this holiday before, mainly because I’d like to forget the majority of it.

After my first adult holiday in Wales the year before I decided to book a holiday in East Sussex for 2017.  I did lots of research and found an converted accessible barn on disabledholidays.com which looked perfect.  We booked it for myself, two carers and Mum, they even allowed dogs!

I headed off early with Mum and my carer.  The second carer would follow behind with extra luggage and leave an hour or so after us.  The journey was going well until we stopped at Clackett Lane services.  My carer went inside leaving me and Mum in the van with the dogs.  Shortly after this Mum got out, standing near the van so she could see me.

After about a minute I saw Peppa on the front seat and heard “click”, my heart started racing, that wasn’t the doors locking was it?  Peppa had somehow managed to step on the central locking button .  I’d be okay of course, the carer would have the key and unlock the van when she got back.

When my carer got back I saw her and Mum talking and looking worried, this wasn’t good!  I had managed to connect to Mc Donalds wi-fi so was able to talk to my carer over facebook messenger.  She gingerly told me the keys were on the dashboard.  My panic rose, I was locked in the van with three dogs, any of which could jump up and accidentally pull my ventilator hose out.  Mum went to ask for help.  Unsurprisingly the staff at Clackett Lane wouldn’t use the tannoy to find someone who could break into a car.

Some staff members did come over and try to use some string to pull the the lock mechanism, with no luck.  Mum and my carer frantically tried to get Peppa to jump on the locking switch again too.  We rang the RAC, who said to ring 999.  Meanwhile Mum had got my other carer on the phone, the good news the spare key was in a suitcase in her car, the bad news was she was about an hour away.

The sun decided to shine then, not metaphorically, the van began to get very hot!  This made my anxiety increase dramatically.  In the end I was stuck in the van for about an hour before my carer arrived and I got out.  The fire brigade turned up about two minutes after that.  I think they could see how pale I was and were quite concerned, asking if I needed an ambulance.

After I had got some fresh air and calmed down we continued our journey.  I should probably have turned back as things didn’t improve.

Tweets from that day

Keys are on dashboard f*ck

Locked in car with dogs

Mum now has a hammer now in case of emergency 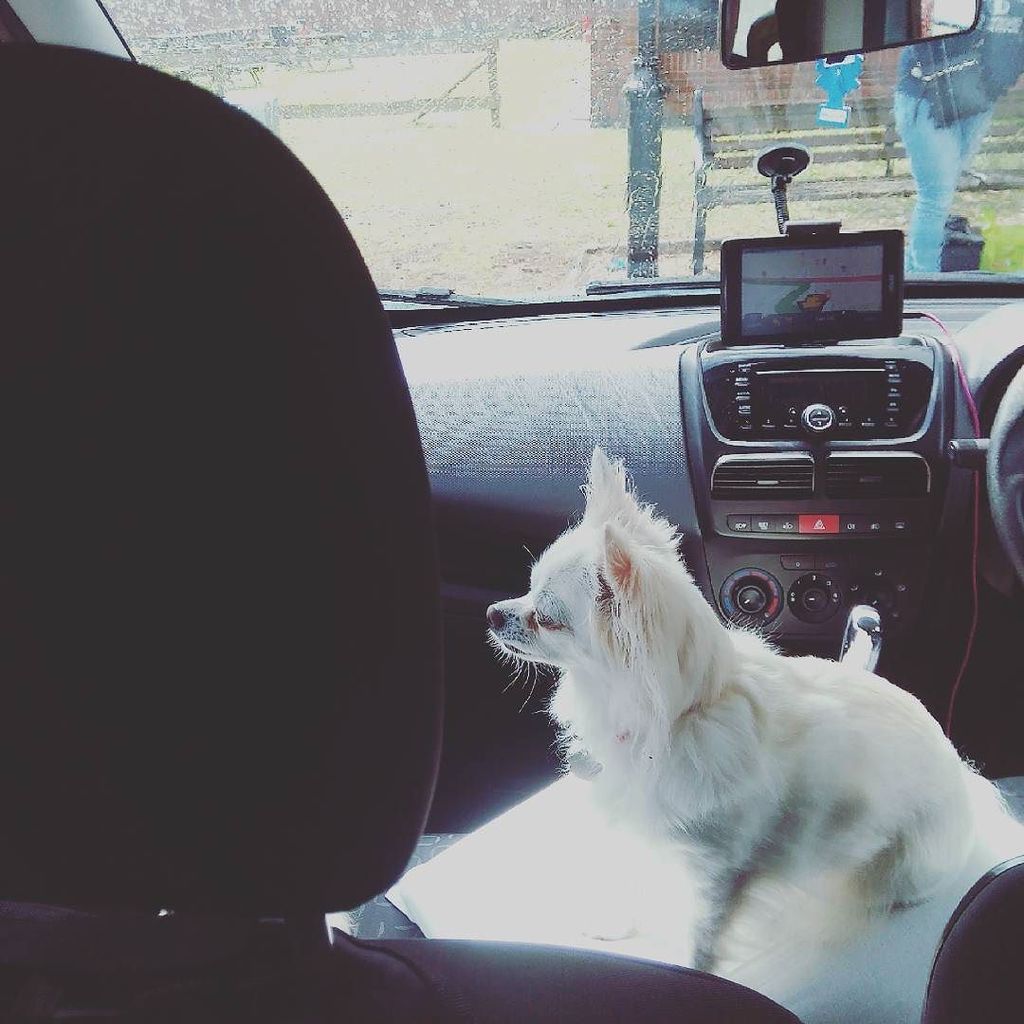 Im okay now heading to holiday cottage in the rain

The barn looked great when we arrived, although the owner was out for a meal and not there to greet and show us around as promised.  Inside was spacious, with a barn ceiling that my carer just had to climb into.  We thought things were looking up. 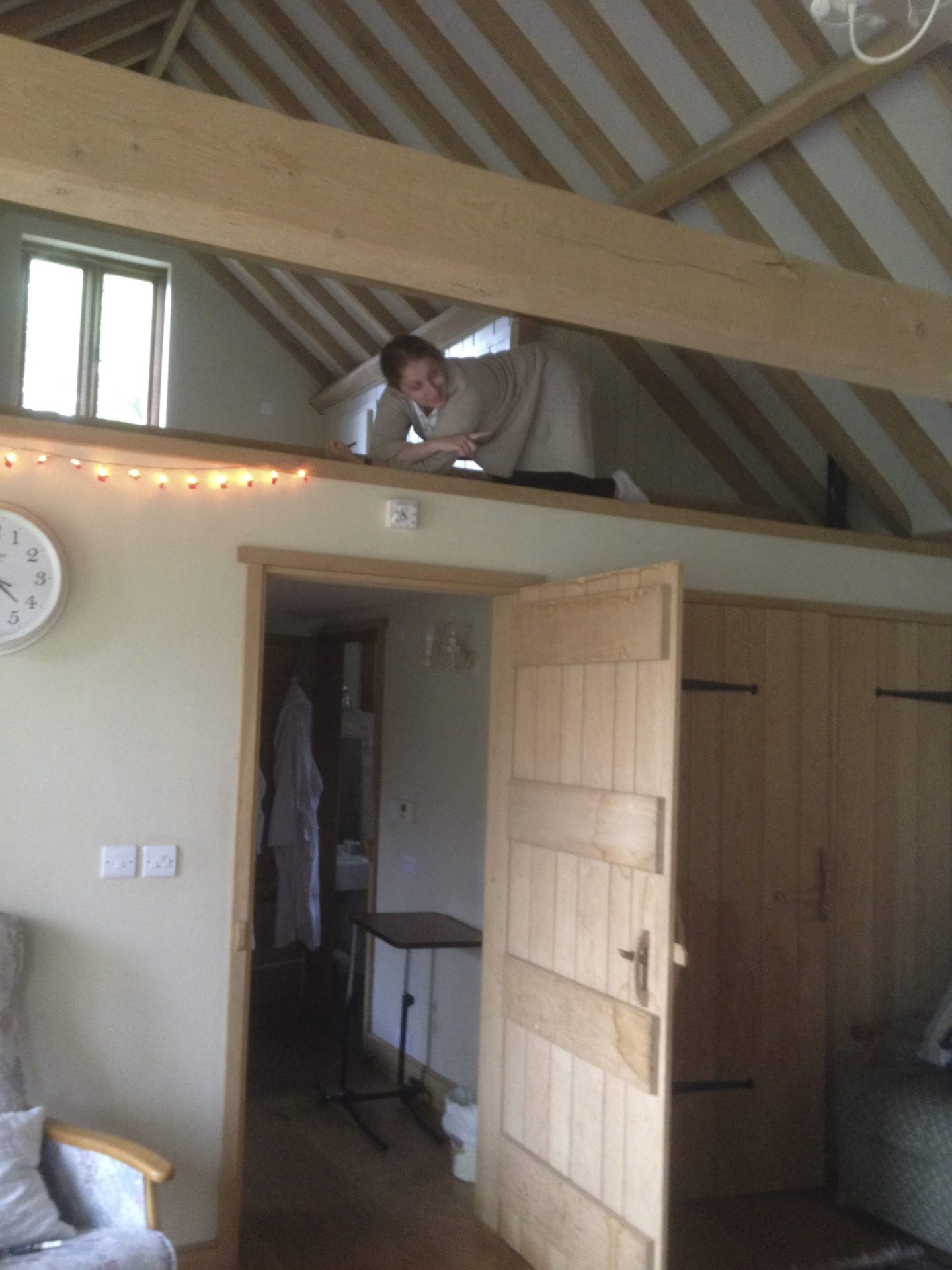 We noticed the garden wasn’t really enclosed, but hopefully when the owner finally showed up she’d put some boards up or something.  Then we saw the portable hoist, we had given wheelchair measurements but this looked very small.  The bedroom was too small to fit the hoist and my wheelchair at the same time too.  It took all three of them, with a lot of effort, to hoist me out of my wheelchair.  They then had to manoeuvre me into the bedroom from the living room while hanging in the sling.

The height of the bed meant I barely cleared it, my legs had to be uncomfortably held up to get in.  Once I was in the bed we found that although it was electric, it wasn’t a hospital style bed.  As the back raised it curved, leaving my head bent backwards uncomfortably, there was no way I could drink in that position.

The second electric bed didn’t even work at all, luckily I did only need the one.  We then tried turning on the heating, of course that didn’t work either.

Eventually, very late, the owner arrived back from her meal and came to check on us.  She seemed nice, promising to do what she could.  But no she wouldn’t be able to contact a local shop and get a new hoist, she wasn’t sure what she could do about the bed but would try to think of something.  Could we not just tie the dogs on leads in the garden?  She denied the heating wasn’t working at first, after a lot of fiddling she gave up and found a portable electric radiator for the room.

I was ready to pack up and go home.  My carers and Mum convinced me to at least try staying, I should probably have ignored them really.

RT @NetflixUK 🗣🗣🗣 Announcing the return of the Netflix Documentary Talent Fund! Open to ANYONE across the UK/IE, 5 selected filmmakers will be given a chance to make a short documentary film with a budget of £30k each, mentored by Netflix. Applications open 16 Jan. netflixdocfund.co.uk

Got out in the van this afternoon, first trip since 2021, unless you include visits to hospital in ambulances. Longest time I've sat in my wheelchair in over a year too. Tired and aching but worth it. #Samsungs20 #RollrightStones pic.twitter.com/hjsk…

I hope all my followers have a lovely day today, wishing you all a Merry Christmas. I do know it will be very hard for some in our Duchenne community, so I'm sending extra love to the families who have lost amazing people this year x

RT @samaritans Call free on 116 123 📱 Retweet and help us reach someone who might need to know that we're here all Christmas 💚 pic.twitter.com/pj1E…