This Friday was LFCC ComicCon 2019, I have been saving for months for this event.  Although there were some issues, I managed to enjoy it by the end of the day.

ComicCon is always a place I feel I fit in, it’s good being with fellow geeks and friends.  Being stared at, not because of my ventilator or wheelchair, but because people are admiring my cosplay is also a good feeling.

My week didn’t begin well.  I felt really ill on Monday night and ended up having to stay in all day Tuesday.  On Wednesday I was supposed to attend a meeting with Barnwood Trust, but needed to get away from everything and let myself recover for the day.

I ended up at Westonbirt Arboretum.  I usually enjoy being there but this time I struggled, I just kept thinking something was missing.  On returning home Mum told me some devastating news, my best friend from primary school had died on Monday night in a car accident.

I haven’t seen my friend Dryden since I was a teenager.  I had to cut all ties with Hastings when I left, you can read more about why in this post “TeenageYears“.  We had reconnected later on Twitter and Instagram and were hoping to catch up at some point.  It always feels like we have forever to do these things doesn’t it?

I am sad and he’s popping up in my mind a lot, we had some fun times together.  But I also feel slightly numb, I’ve lost too many friends this year and I don’t think my brain can quite process it all.  That’s not to say I’m not upset, my eyes are regularly filling up with tears, but I’m not grieving properly. 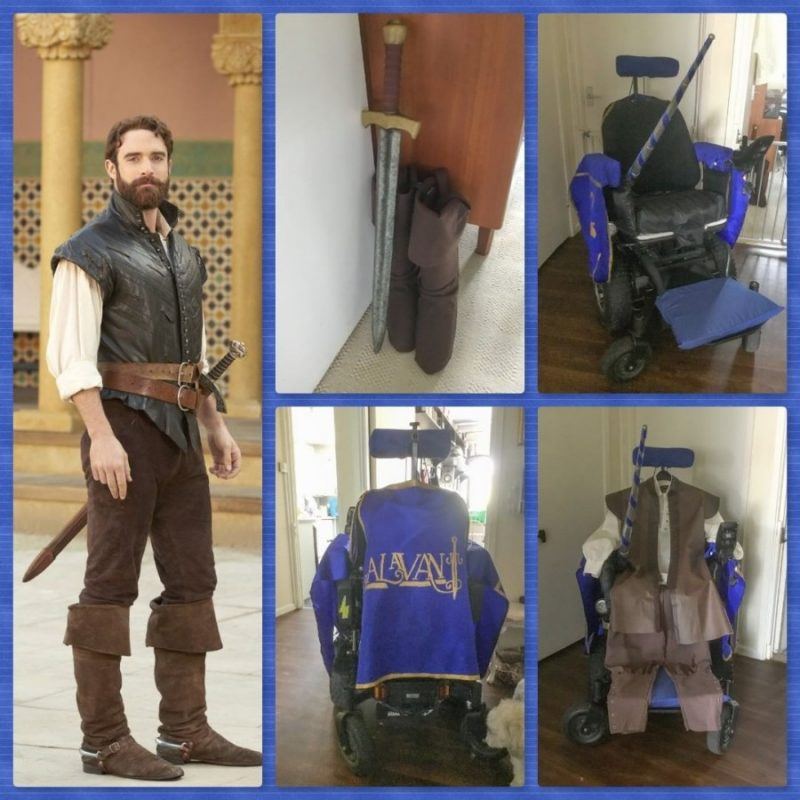 I decided on my cosplay about a month ago when I heard Karen David would be attending LFCC ComicCon 2019.  Karen played Princess Isabella Maria Lucia Elizabetta in the great fantasy/musical/comedy show Galavant.

I first did a Galavant cosplay a few years ago but really wasn’t that happy with it.  This time I decided to forget the armour, go for a medieval look similar to Galavant and grow a beard.  I did reuse some of the original costume, like the lance, but everything was touched up and improved upon.

On Friday I got up at 5:30 AM, comiccons are the only things that can get me up at this ungodly hour!  I managed to get off by seven as planned and was in London by nine thirty.  That’s when I first started getting stressed.   The car park ANPR didn’t recognise my licence plate number correctly.  We wandered around the outside of Olympia for twenty minutes or so until someone actually directed us to the correct location for the car park office.  We were then told the ticket couldn’t be changed until we were actually leaving.

After this we rushed into hall H for entry.   Entry went surprisingly quickly, which was good as my first photo shoot was at 10:35.  We made it on time, after navigating the ground floor, finding the lift, then the photo area.  The crew member on duty recognised my cosplay as she was also a fan, saying it was great.  I then got to meet Adam Baldwin, I have been a fan since Firefly, he seemed a nice, friendly guy.

Next up I attended a talk with Sylvester McCoy and Sophie Aldred from Dr Who.  Both stars were very entertaining and I managed to de-stress a little. 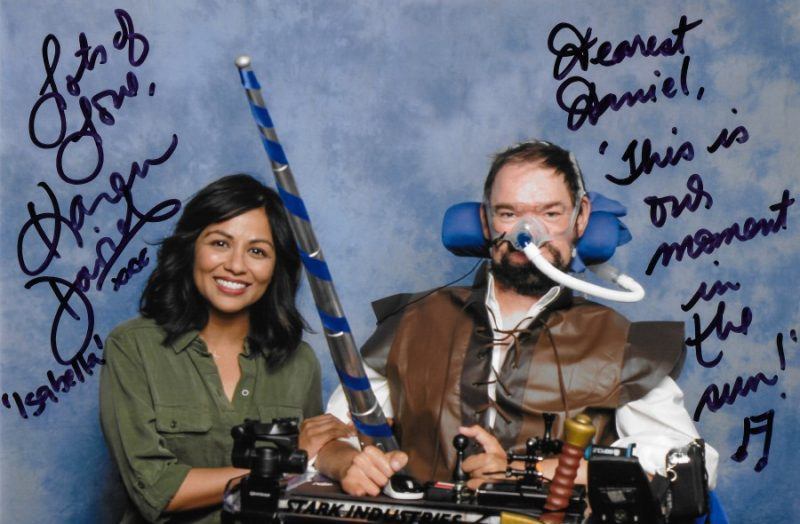 My next photo shoot was with Karen David, she seemed to love my costume and was absolutely stunning.  After this I was due to have a photo with Manu Bennet.  We waited about twenty minutes before being told his shoot had been postponed until 6:20.  As you can imagine I was rather frustrated.  It wasn’t Manu’s or Showmaster’s fault though, he was stuck on a plane due to chaos at the airport.

We then went for a photo with Sophie Aldred, ACE from Dr Who.  I was ushered to the front of the queue and had a quick chat with a crew member I have become friendly with over the years.  Sophie was lovely and complimented me on my costume, photo shoots are always too fleeting so I will definitely seek her out for a chat at a future convention.

I knew I couldn’t stay until Manu’s new photo shoot time, as my carer needed to finish at nine o’clock, so, thoroughly disappointed, I reluctantly went and asked for a refund. Afterwards I just wandered around for a while, I was still quite stressed and not really enjoying myself.

I decided to head to Manu Bennett’s talk, hoping he may turn up.  After a while I was pretty convinced he wouldn’t arrive, but about half an hour late he got there.  Most people after sitting on a plane for hours and knowing they’d only have three hours at a convention would have just cancelled and gone to a hotel, but Manu made the effort, for his fans.

I couldn’t stay for the whole talk as I needed to see my friend Tasha before leaving, also knowing that before going home I would need to sort out parking.

Before heading downstairs I made the snap decision of getting my photo with Karen David signed.  This was probably my best decision of the day, she was lovely and we had a really enjoyable chat, probably the longest I’ve spent with someone at one of these events!  I would have happily stayed longer but did need to get going.  Talking with Karen finally lifted my mood though.

Afterwards we headed downstairs and found my friend Tasha, before heading home.

Looking back there were several nice moments talking and chatting with visitors and staff members, lots of people complemented my costume and I had several photos taken, including by the official LFCC photographer and The Cosplay Journal.

The reason I didn’t enjoy the day as much as I should have was probably me and my brain, for good reasons though, and luckily I understand that.  It also shows that just talking with someone who is genuinely nice can go a long way to make you feel better.  Thanks Karen.

RT @whatnick Not everything was lost with WorldWind. I met and worked with amazing people who are still in touch like @DanielBaker_eu , @imann04 and @Emxsys . However the code is lost in the sands of time and churn of tech.

RT @whatnick I have seen open source projects I put years of my life into wither on the vine as the core organisation lost interest. Very personal to me was WorldWind and NASA. Please see @OpenDataCube join @OSGeo and help us build a community : lists.osgeo.org/pipe…. Thanks to @alexgleith

RT @BethEvsTV Hello Cardiff. Oscar has gone missing overnight from my house in Grangetown. It’s really out of character and he is basically my lifeline right now so I really need him home. Please keep an eye out. pic.twitter.com/3NVp…

A rather wet Jay visiting this afternoon pic.twitter.com/gBcL…

My website daniel-baker.photogr… should be back and faster than ever after a server upgrade. Thanks @stablepoint for the help getting it back up and running. Anyone interested in a fast website with great support should try them clients.stablepoint.…