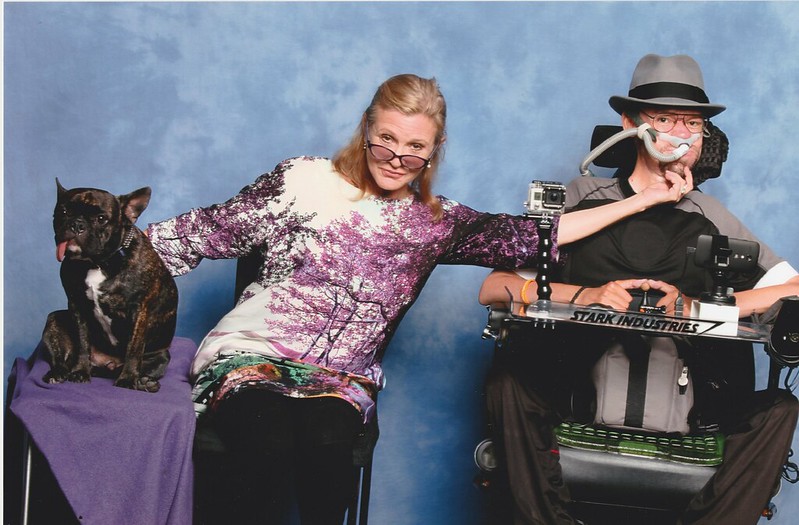 Well Sunday was the big day, I’d bought tickets, printed routes, worked out a schedule and even made an ID badge for my PA, all of this preparation wasn’t for an invasion or coup (although that’s a good idea), it was for comiccon!

The event was being held in London at Earls Court, it had some huge names like Summer Glau, Carrie Fisher and Stan Lee, so I had to go.  I woke up at six a.m., which is extremely early for me, by twenty to eight we were ready to leave, I’d hoped to leave by seven but things never go entirely to plan.  We arrived in London just after ten and after a little driving round the streets of London found a parking space, it wasn’t too long a walk so we headed off, passing a TARDIS outside Earls Court station, I took this as a rather good geeky omen. 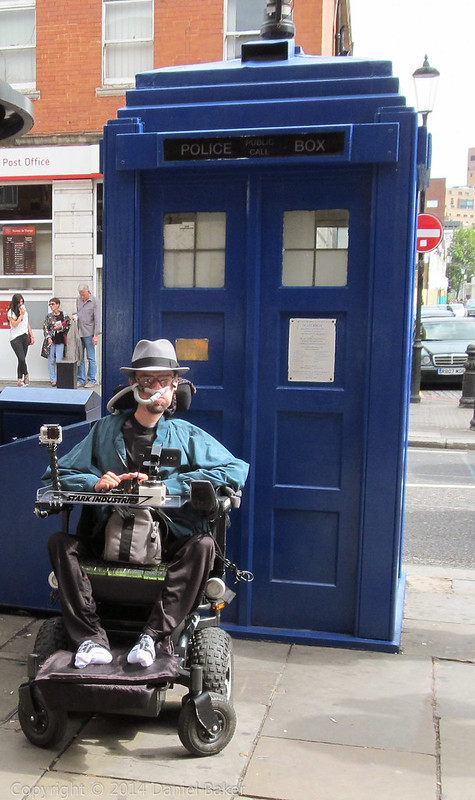 Heading towards the main doors we realised just how busy it was going to be, long queues outside and thousands of people inside by the looks of things, we jumped the queues as I had emailed the event organisers and had been told I was allowed to go through the gold ticket holders door.  After entering we had to go to the organisers booth to get a voucher that would allow us certain perks, this didn’t take long so we then headed to the sales desk to get a refund on Stan Lee’s talk (it clashed with a photoshoot).  The queue turned out to be rather long with only one member of staff handling refunds, forty minutes later we had my refund, this was rather frustrating but couldn’t be helped, it meant I didn’t have long before my first photoshoot so we quickly pushed through the crowds and had a little look at stalls.

The first photoshoot was with Juliet Landau, we joined the end of the queue and waited, eventually someone came down the line to tell us Juliet had arrived late but the queue would move quickly now, shortly after this a member of staff noticed the voucher in my PA’s hand, “oh you don’t need to queue, come to the front”, knowing this a little sooner would have been handy!  Photoshhots are quick, I was rushed to sit next to her, the photo was taken and a couple of words shared then grab the instant photograph and leave.  Unfortunately because Juliet was late it meant I missed the Game of Thrones talk, again it couldn’t be helped.

We had a bit of time now before the next photoshoot so had a bit of a look round, outside were some Transformers so them first as I needed to escape from the heat inside, then we went to hall one and saw the Batmobiles, then back to hall two to just wander round, quite a few people wanted pictures of me, some even wanted to pose with me, I actually quite enjoyed being cool, geeks don’t usually get treated like celebrities. 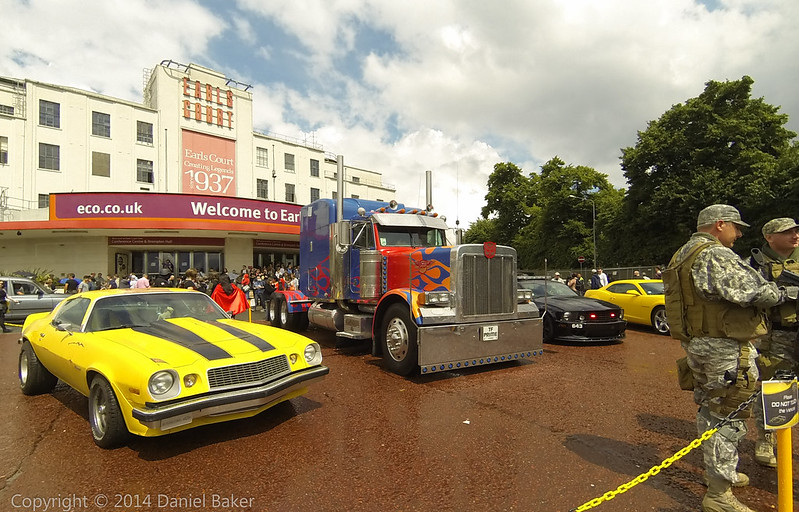 My next photoshoot was with Lena Headey, we jumped the queue this time and I was in, the security guard did notice my GoPro was on though (oops) he came over and politely asked if he could turn it off, I did feel a bit like a naughty schoolboy but I think he realised I would have turned it off myself if I could and wasn’t intentionally breaking the rules, Lena was nice, thanking me for coming and posing, the security guard then came up again and turned my camera back on for me.  Next was Carrie Fisher’s photoshoot, again we got in almost first, she had brought her dog with her (quirky but this is Carrie Fisher), I carefully manoeuvred my chair next to her stool, I could have actually got closer but really didn’t want to reverse into her.  She was very nice and warm, the photographer took one snap but Carrie signaled she wanted a second one, she leaned over and stroked my bearded chin cheekily!  Getting two photos was really great, something she didn’t have to do but showed she wasn’t just another celebrity who doesn’t really care about her fans, it’s something I’ll always remember fondly. 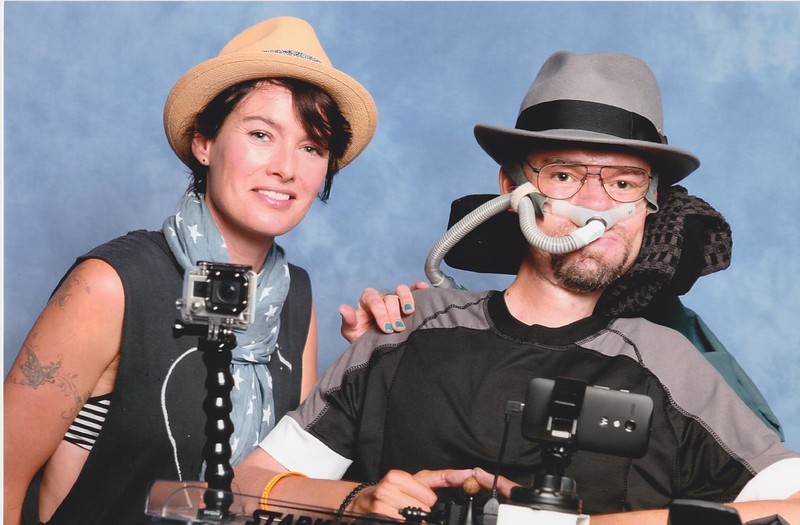 Next up was Summer Glau, my PA said she’d revive me should I pass out and wipe the drool from my chin, again front of the queue, Summer was exactly as you’d imagine she’d be, a beautiful, elegant young lady and quite quiet, she was sweet and wished me a nice day before I left.  We had a little time to wander again and had a look at some more stalls, at the end of one aisle a boy came up and told me how cool I looked, soon after I had a group of young children around me admiring my wheelchair and me, it was really rather nice.  Somewhere around this time, maybe it was earlier, a child went missing, we were in the lobby and just about to enter the hall, doors were shut and staff blocked anyone getting in or out while the child was searched for.  I’m not sure how long this lasted, fifteen or twenty minutes maybe, things got rather cramped in that lobby as people came in from outside and were stuck not being able to enter the main hall, it got hot too, I managed to keep my anxiety under control but could see there was no way out through the mass pushing in, luckily the child was found and the doors opened before anything really bad happened. 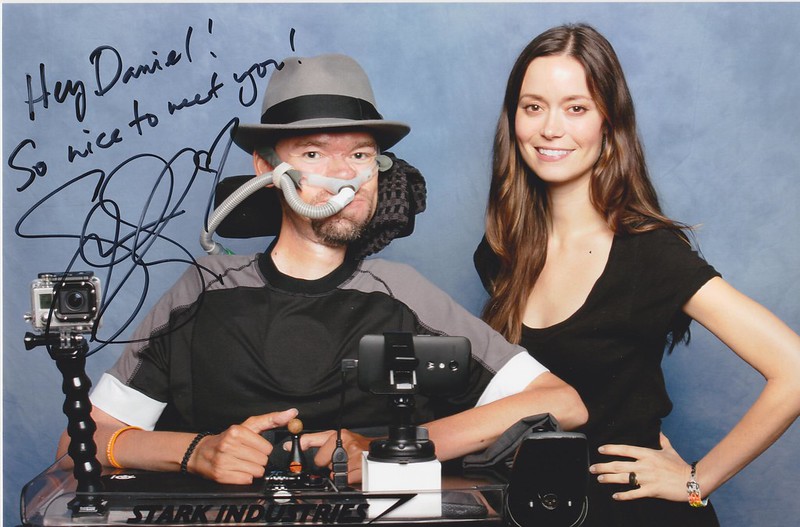 The next photoshoot was the big one, Stan Lee, we queued and waited, and waited, the time dragged on, I had another photoshoot booked when would he get here?  Would he get here?  There were frustrated whispers between the staff, the crowd getting impatient, my other photoshoot was about to end, sod it I rushed to the other shoot.  Just in time, Helen Slater had done her last photo and was ready to go, “one more” said the member of staff and Helen smiled and stood in front of the screen, I went up and she said “We’ve been waiting for you”, I wasn’t sure of the appropriate response to tbis as obviously they hadn’t actually been waiting, I gave a goofy grin and said hello, she then asked if she could lean closer, I knew the answer to this one!  “Yes of course”, I got a great photo with her and am so glad I risked not seeing Stan. 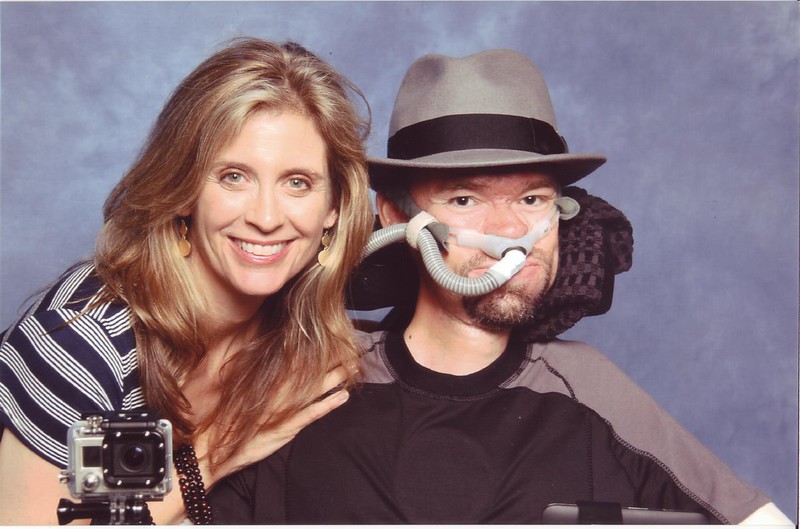 We returned to the Stan queue to find it hadn’t moved, he still wasn’t there, that was lucky as his ticket had been very expensive, not too long afterwards we heard murmurs of “Stan is on his way”, a while later I heard noises from behind me of a security guard telling people to move, then someone touched my arm as they walked passed, I saw grey hair between bodyguards, Stan had touched my arm on the way passed, after hearing so many stories during the day about how no one was allowed to touch him or get too close I was rather shocked.  I was near thevfront of the queue so went in and again was careful not to get too close and knock his stool, I was very aware of the trouble that would cause as well as not wanting him hurt of course, he said hello and leaned towards me for the photo, he seemed a rather nice man but had that powerful voice of J Jonah Jameson he’s known for. 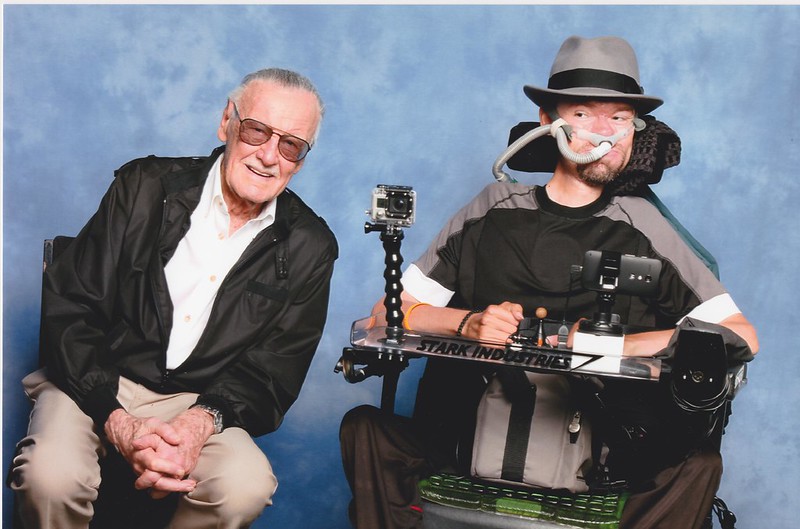 Everything was now done, time to relax, the hall was also much less busy so I decided to try to get Summer Glau’s autograph, we found a red shirt and asked as we weren’t sure how my voucher worked for autograph signing, she took us over to Summer’s queue and we jumped in, the man with her, possibly her agent, told me to come straight forward once I’d paid, he also complemented me on my hat which pleased me.  Summer said hello and wrote a message on my photo, I didn’t stay long as there were others queuing for a chance to meet her, I’d met her and she was lovely and as beautiful as I’d imagined.  We then wandered again and I bought a T-shirt, it was time to go, but no, I wanted Helen Slater’s autograph, she’d seemed so nice how could I not?  We went to the nearly deserted autograph section, Helen had picked up her bag about to leave, my PA asked the crew member if there was chance of an autograph but before she could reply Helen looked across and recognising me said it was okay.  She asked my name and signed a picture of her as Supergirl, my PA tried getting the money out of my wallet bu Helen shook her head and said no need, it wasn’t patronising or pitying, she was just being a nice person, you could see it in her smile. 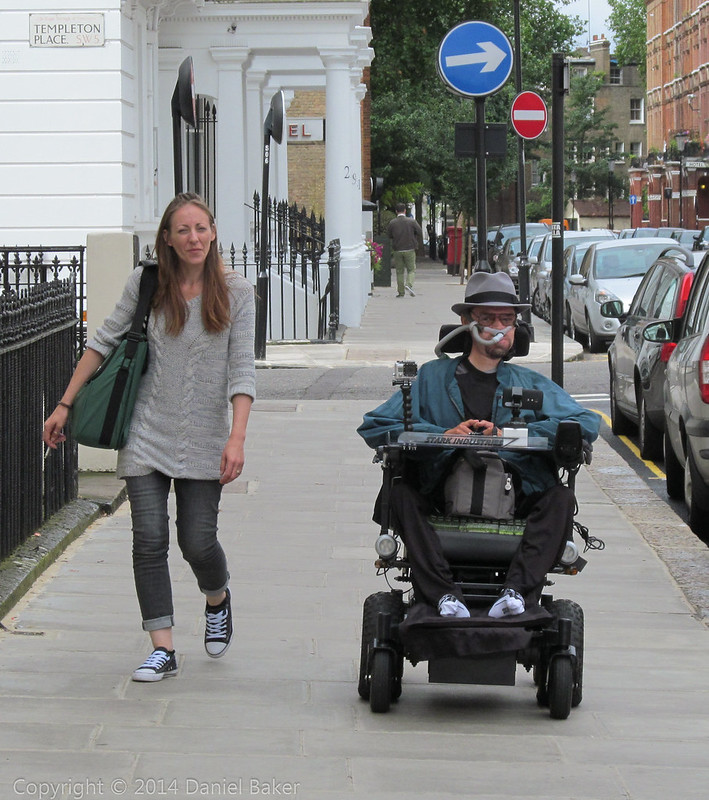 We returned to my van and headed home, traffic was a nightmare so we finally got back to Cheltenham at gone ten, I was exhausted, my bum ached, my chest ached and my ankle hurt, but when I finally settled down to sleep after 20 hours of being awake I didn’t mind, it was worth it and I’d kicked anxiety’s butt, this time last year I wouldn’t of dreamed I could do this!