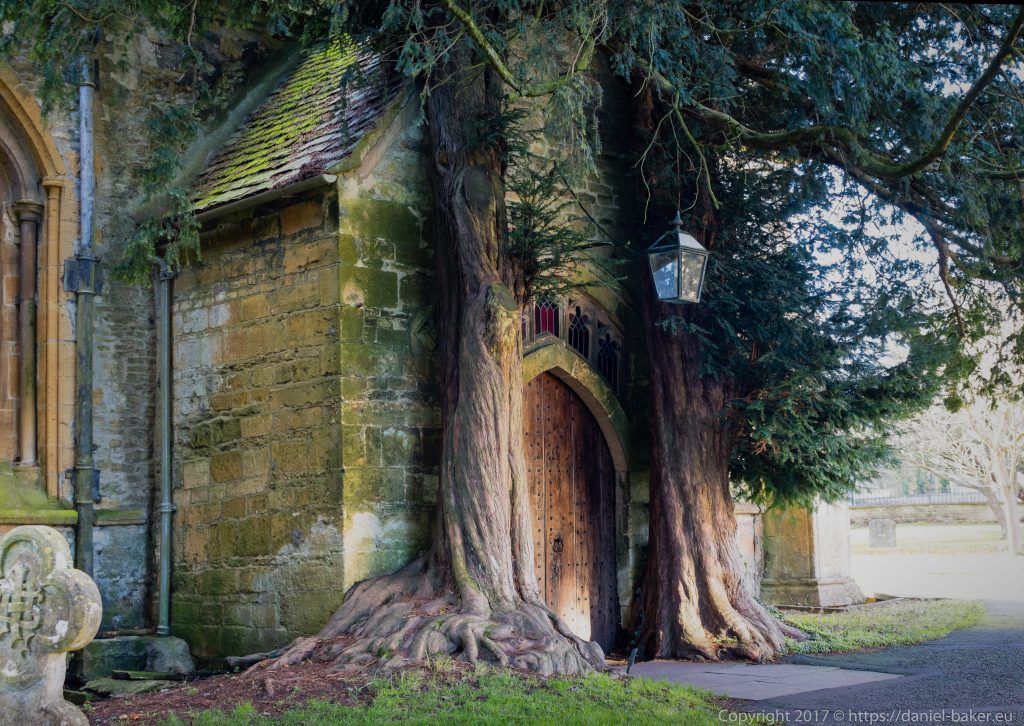 “The trees (pictured) apparently inspired JRR Tolkien’s door to Moria. Although it can never be proven, JRR Tolkien was known to visit the Cotswolds so there’s good reason to believe that they were. Especially as the Bell Inn pub – just 5 miles away in Moreton-in-Marsh – is thought to be the inspiration to the Prancing Horse pub which also appears in the book. So much so that a branch of the Tolkien Society presented them with a special print to commemorate this!” Source – Tom Benjamin, www.gocotswolds.co.uk, photograph copyright 2017 Daniel Baker

Last week I saw a picture on Twitter of St. Edwards Church in Stow-on-the-Wold, it looked like something out of a fairy-tale so I did some research and found out some people think it was the inspiration for Tolkien’s entrance to Moria!  The next day I headed for Stow-on-the-Wold and took some pictures of the church, after this it occurred to me that I lived in the middle of Tolkien country and there must be lots of places nearby that inspired Tolkien’s stories.  So finding Middle Earth has become my project over the winter, I’ll be travelling around trying to take some fantasy style pictures of Tolkienesque places, maybe I’ll spot some Hobbits on my journey, I just wish I had a grey wizard to guide me.

I’ve looked at several articles about Tolkien and made maps of places he lived, worked or inspired his stories, he even visited Cheltenham to woo his future wife, she stayed in Charlton Kings according to census records but I’ve yet to find the address.  I know some places may not be wheelchair accessible but it will be an interesting journey and hopefully help improve my photography skills. “Though the spectacular panoramic views offered by Broadway Tower beg visitors to imagine besieging armies, it is for another reason altogether that we include this gothic-styled folly. It is the tower’s association with William Morris, the figurehead of the Arts and Craft movement, which links us to the author. The multi-talented Morris, whose fantasy stories Tolkien and his friend C.S. Lewis greatly admired, had rented the building with the painter Edward Burne-Jones in the 1880s. (Some even think Burne-Jones’ paintings also influenced the young Tolkien). But exactly how influential was Morris on Tolkien’s writings? Let us consult that ancient book of knowledge, Wikipedia: ‘The name “Gandolf” occurs as a character in William Morris’ 1896 fantasy novel The Well at the World’s End. Morris’ book is a multi-part ‘magical journey’ involving elves, dwarves and kings in a pseudo-medieval landscape which is known to have deeply influenced Tolkien.’ Some fans also believe there is a link between Broadway Tower and Amon Hen, a hill appearing in The Lord of the Rings which serves as a watchtower. It is here where the hobbit Frodo puts on an evil ring, sits on the ancient Seat of Seeing and is able to view events occurring many miles away – just as anyone at the top of Broadway Tower can see far into the surrounding counties.” – Source Matt Dicks, www.cotswold-homes.com, Photograph copyright 2017 Daniel Baker

Today was my first day finding middle earth, I went to Broadway Tower, a 45 minute drive, parking was cheap, two pounds for four hours, the machine only takes coins which of course I didn’t have, so I bought my PA a hot chocolate and put the change in the machine.  I didn’t actually go in the tower and only took photos outside, it probably wouldn’t be the best terrain for most wheelchairs but mine managed without trouble.  We stayed about half an hour by which time I was frozen, but hopefully I got some decent pictures.

“After much research, the Tolkien Society presented a special print to The Bell Inn in Moreton-in-Marsh, citing many structural similarities between the building and The Prancing Pony, an inn appearing in the The Lord of the Rings. Based in the curfew town of Bree, The Prancing Pony is the site of an attempt on the hobbits’ lives by the chilling Ringwraiths. It is likely the author would have been familiar with The Bell as it lay en route to his brother’s farm on the way from Oxford, and so both the town and its inn could well have stoked Tolkien’s imagination on his travels.” – Source Matt Dicks, www.cotswold-homes.com, Photograph copyright 2017 Daniel Baker

Next up was Moreton-in-Marsh, parking was easy to find by the train station, it was free for Blue Badge holders and close to the town centre.  I probably didn’t pick the best day as it turned out it was market day, don’t get me wrong it was a lovely market it just meant getting a good picture of the Bell Inn was impossible, so I’ll return again to get a better one.

We then headed to the Four Shire Stone, unfortunately it’s right on a corner as you turn into a road with no pavement or place to park, I’ll try again in slightly warmer weather so we can walk for a longer distance from wherever we find to park.

“According to Professor Shippey’s Road to Middle Earth, p75, when Tolkien refers to Standing Stones, Rollright is probably the place he is thinking of. Tolkien’s phrase “jagged teeth out of green gums” is also a good description of the stones here at Rollright. Those hills were crowned with green mounds and on some were standing stones pointing upwards like jagged teeth out of green gums. There stood a single stone standing tall under the sun above. The Rollright Stones are on the direct route from Oxford to Evesham, frequently travelled by Tolkien” – Source Tour Guide of JRRTolkien related sites, http://www.adcbooks.co.uk, Photograph copyright 2017 Daniel Baker

The final place today was the Rollright Stones, there is a large lay-by right next to the site so parking was easy, I was half expecting it to have stiles and not be accessible, but surprisingly the area had a drop kerb followed by a gate wide enough for a wheelchair, there is a grass path between the stone circle and the Whispering Knights which has a mesh plastic underlay to make it wheelchair friendly.  Entry costs £1 for adults which you put in a donation box by the entry gate, as parking is free it’s very reasonable.  We headed into the field with the King’s Men and saw three witches made of wicker, after taking a photo or two I turned to the stone circle and took more photos, of course I had to go inside the circle and get my PA to take a photo.  Next we headed round to the Whispering Knights, I got a nice picture then headed across the road to the King Stone, this field isn’t level and most wheelchairs would struggle, I managed to take one photo out of focus but my hands were so cold by this point I could barely move my fingers and needed to head back to the van. I had a good day despite the cold and the satnav deciding to lose it’s GPS lock several times, leading t wasted time travelling down many wrong roads, I will return to some of these places, not just for more photographs, but to enjoy new found places.  Finding Middle Earth has been a rather enjoyable adventure so far!

More photos from my day exploring –