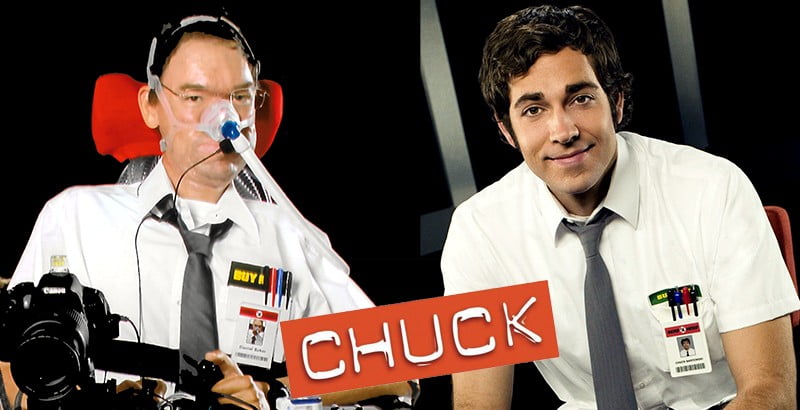 I had been debating whether to attend LFCC 2018 or not, it’s a great event but funds are low (an entry ticket plus parking alone costs over £50), carers are not always reliable and I’m not overly keen on Olympia as a venue accessibility wise.  I eventually decided I’d buy parking as I could get that refunded if necessary and I also bought one day entry.  Then I booked care, hoping it wouldn’t get cancelled last minute, and waited for the schedule to be released before booking any photos or talks. 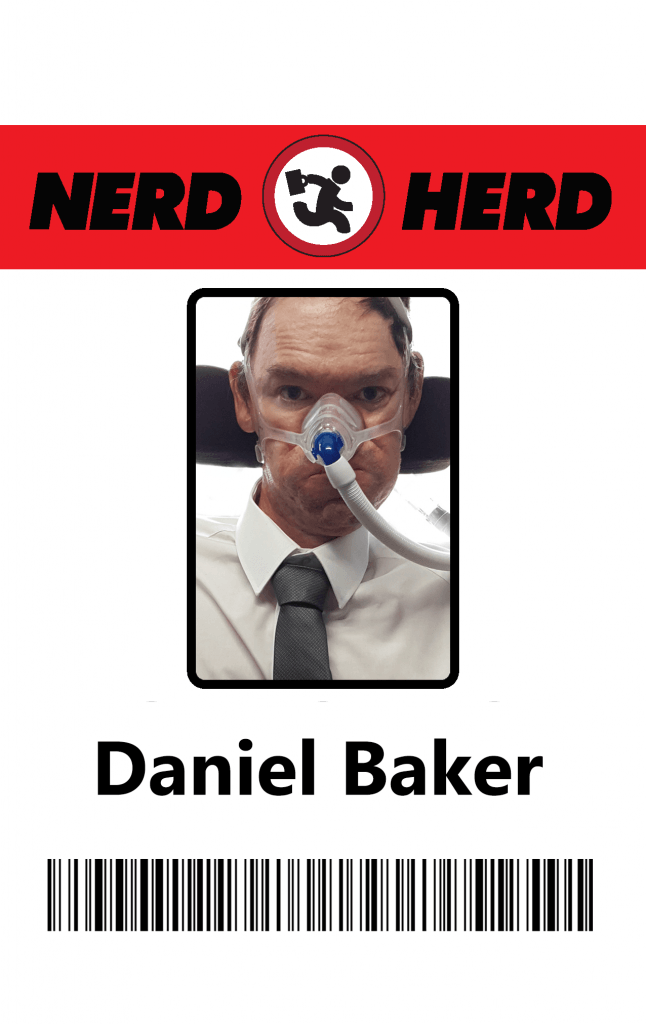 The next step was preparing my cosplay, I already had Dr Strange from last year so decided to go with that, I grew my beard and bought a few things to tweak the costume.  Then Showmasters announced Zachary Levi as a guest, one of my all time favourite shows was Chuck, I’d also wanted to do a Chuck cosplay for ages, so I had to quickly work out what I would need and design the costume.

Looking through pictures online I worked out Chuck’s outfit, most I already had, grey tie, short sleeved white shirt, black trousers and I even had socks that look like sneakers.  I bought a cheap watch off Amazon which looked similar to Chuck’s, also buying  some biros and some card for the pocket protector, this looked easier to make than buy so I printed it out and also a made Nerd Herd ID badge (the barcode actually links to my website).  For me the wheelchair is also a big part of my costume, so after re-watching a couple of episodes of the first season of Chuck, I decided to turn it into something resembling a Nerd Herd car.  Red tape around the black parts, a red headrest cover made from children’s tights, white armrest covers, some photoshopping for a printed out license plate plus side panels and it was pretty much done.  I also put nerd herd wallpaper on my phone and added the Chuck ringtone for the final touches, my hair I left messy and applied some black nanogens to make it look slightly thicker and darker (a trick I learned from Helen while filming my Requiem scene last year)

My carer also wanted to join in, originally she wanted to dress as Ellie but couldn’t get any blue scrubs, I downloaded a few pictures of Sarah in her trademark orange and white outfit, she managed to whip into town on Saturday and found a decent facsimile including a blonde wig.

Another last minute guest was announced on Saturday, I knew this would mean a lot more rushing around on the day and leave my bank account dangerously low but I doubted I’d get chance to ever meet David Tennant again, a brilliant actor, both as the Doctor and as Killgrave, so I went for it. The day came and we left slightly later than I’d hoped but we were still on the road by 7:30 AM, we arrived by Olympia at about 9:30 AM, which would have been great except some geniuses had decided to cordon off the direct access road to the car park, this meant a twenty minute detour.  We finally got in and found the accessibility entrance easily, Showmasters could have done with three people checking passes rather than just two as there was quite a queue of wheelchairs and other disabled people waiting and starting to block the ramp and entrance.

We headed straight upstairs so we could see the lay of the land, then it was time to go to my first photo, this was with Jewel Staite who played Kaylee in Firefly (the best sci-fi show ever made), she was lovely as I’d expected.  Next we headed downstairs for my carer to get some “fresh air”, we then quickly headed to John Schneider‘s talk, it was great fun and he thanked me afterwards for coming to the talk, in a genuine way, and not patronising which I thought was very nice of him.  We managed a little wander before the iZombie talk, I couldn’t stay for the whole talk frustratingly as the David Tennant photo was due to start before the talk ended, I needn’t have rushed though as it started late! The queue was massive but I got in near the front, the Showmasters crew were much better prepared for disabled guests than at Collectormania earlier this year thankfully, when I got to David he complemented my costume and we had our photo.  As there wasn’t much room in the booth it was suggested I go outside while my carer picked up the picture, I went outside and waited in the crowds, a few minutes passed and my anxiety started kicking in.  After what seemed like ages, but was probably only a couple of minutes, she came up to me and said the crew couldn’t find my picture!  My anxiety and fear of having somehow been left alone faded quickly and I was rushed back in for a second photo, looking on the bright side this did mean I had got to meet David twice, something many people would be very envious of I’m sure. Next up, after a short rest reclined in my chair, was Zachary Levi, Chuck himself, but before this I had an old school friend come up to me and say hello, we hadn’t seen each other in over thirty years but had been in touch on facebook.  Neither of us had expected to see each other there, so it was a lovely surprise and great to meet her and her daughter Amber.  Zachary was tall as I’d expected and loved my costume, the effort had definitely been worth it.  I had a break again following Zachary, during which both Steven Segal and Jason Momoa walked passed, if I hadn’t been reclined I’d have managed to get pictures of both! We then headed to see Rose McIver, she was gorgeous and had I been standing that Kiwi accent would have made me go weak at the knees.  This was my last photo of the day so it gave me some time to finally relax and wander round the show, it was still unusually busy for a Sunday though, making it slightly less fun.

We headed home just after 6 PM, London traffic wasn’t great and we missed a turn too, eventually arriving home at 9 PM completely exhausted.  The show was great and I’m glad I went, friendly, helpful staff and a wonderful atmosphere.  I’m not sure how many people recognised my costume, I could tell the true nerds over the regular geeks though as those were the ones you could hear saying “wow look at that Chuck cosplay”.  There was also a lovely girl in the Rose queue who had a chat with my carer and me, she had thought about a Chuck cosplay herself but with little time stuck with her brilliant Olivia Moore outfit.

Edit : I just Got this tweet from Zach which has made my day 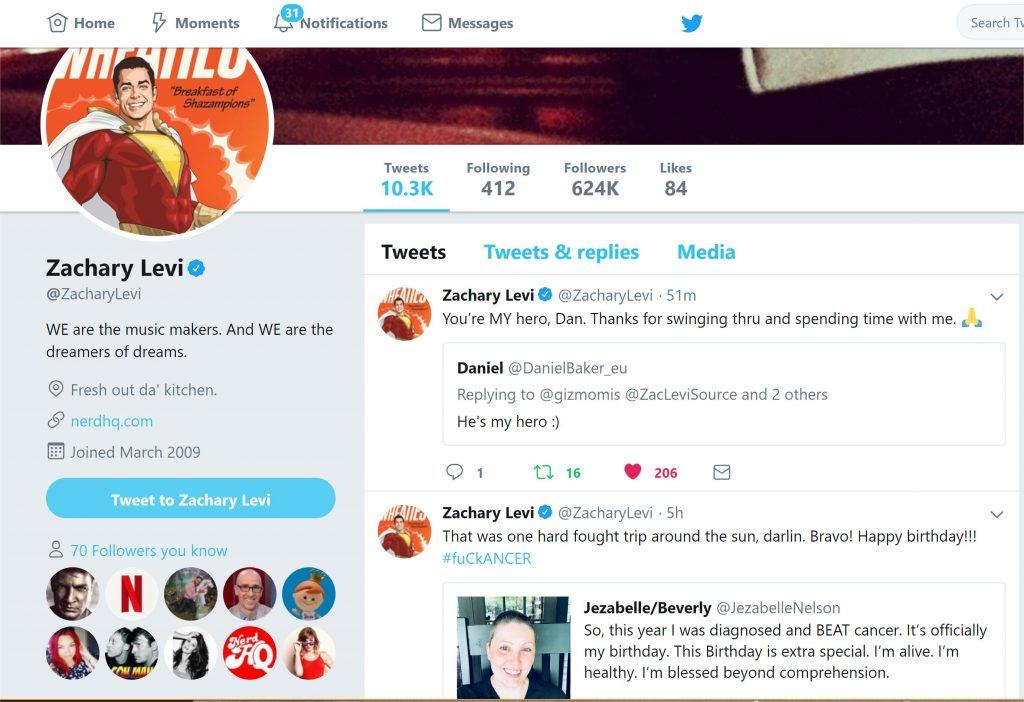