After meeting Jodie Whittaker last week, this weekend it was time to meet more celebrities at Collectormania 26.

I had planned Collectormania 26 to be my main convention this year.  I managed to buy tickets a couple at a time over the year so I wouldn’t end up missing out.  The first person I bought a photoshoot for was Laura Vandervoort, who played Kara in Smallville.  The next two tickets were for Brandon Routh and Adam Baldwin, both actors who’s work I really enjoy.

I had decided on two costumes for Collectormania 26, Clark/Superman for meeting Laura, and Chuck for Adam and Brandon.  Of course things didn’t go exactly to plan.  I realised my Superman boots had been repurposed for another costume, then Adam Baldwin cancelled.

After several attempts at quickly remaking the Superman boots it was obvious they wouldn’t be done in time.  I ended up with a patch job over some other foam boots, not perfect but it would have to do.

With Adam cancelling I decided I’d switch to my Jay Garrick Flash costume for the second day instead.  Jay is one of my current favourite costumes and popular at conventions.  Showmasters kindly let me swap my Brandon ticket to Saturday which made things much easier for me. 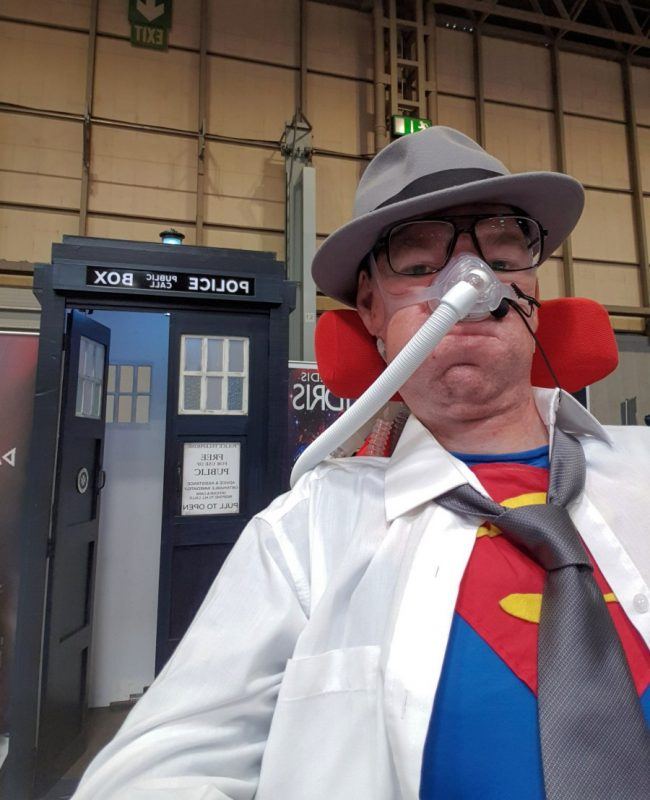 So on Saturday I attended Collectormania 26 as Clark/Superman.  We got there not too long after opening and everything went smoothly, despite setting off the NEC metal detector!  It was a good day, lots of people loved my costume.  I also seem to have developed some friends amongst the Showmasters crew, many recognised me and came over to say hi.  I even got to meet the paramedic who took me to hospital two years ago again, he does security at these events alongside his day job.  It’s really nice being part of this community, no one ever judges and you get to meet up with people from different events regularly.

Anyway back to Saturday, wearing basically a lycra onesie at an event with the aircon is switched up high can be quite uncomfortable!  Luckily it was nice outside so I could regularly pop out and warm up.  After wandering a bit and sitting in on a few talks it was time for my photo with Laura.  I explained I had another shoot straight afterwards in a different booth so was rushed to the front.

Laura was absolutely stunning, and I got the hug I had requested on Twitter.  She seemed really nice at both the photoshoot and also in her talks.  Just before entering the shoot I got to see Mehcad Brooks share a lovely moment with an older fan.  She cheekily asked him for a kiss and he ever so kindly pecked her on the cheek, she had to quickly sit down after this due to her “heart fluttering”.  Mehcad obviously genuinely cares and takes time out for his fans.

The next shoot was with Brandon Routh, I currently enjoy watching him in Legends of Tomorrow, but also loved his version of Superman in Superman Returns, and of course he also appeared in one of my favourite TV shows Chuck.  Brandon remembered me from a tweet I’d sent the previous night and really appreciated my costume.  Another nice guy who I’m glad that I had the chance to meet.

With all my photoshoots and talks over I wandered around for a bit then headed home to my dogs, including my very own Superdog, Kara.

Sunday I decided I would take my camera as I had no photoshoots it would give me chance to take photos of celebrities at their talks.  First off was John Ratzenberger from Cheers, I also really liked his character in House II.  John is a funny guy, he works well interacting with an audience and also seems well rounded, with a very normal life outside of acting.  He gave lots of entertaining anecdotes and also slipped into the characters of both Cliff and Hamm. 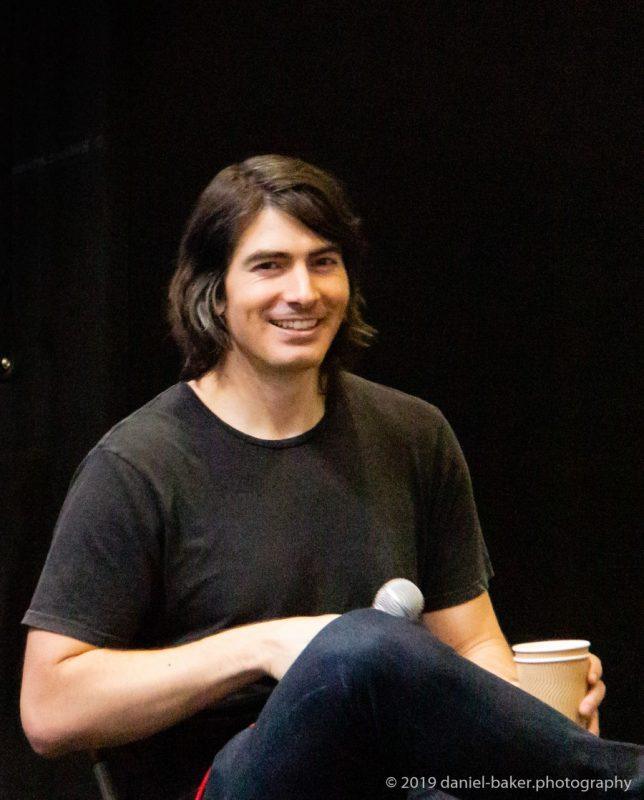 The second talk was Brandon who talked about how much he enjoys comedic roles like Ray Palmer.  He also spoke a lot about Superman Returns, he wasn’t nasty about the new movies but did say they weren’t his idea of Superman.  I also grew up with Christopher Reeve as my Superman, Brandon pointed out the new Superman films don’t really have the Clark side.

This made me realise that’s what was missing for me too, the humour and humanity of Clark Kent, bumbling reporter.  I watched Superman Returns again today, I enjoyed it and it felt like a true sequel to Superman II.  I’m sad there weren’t sequels, but it also does a good job tying up that era for me.  I doubt there will be more Superman movies I really enjoy.  But at least we have the DC TV universe which does a good job capturing that old style, with comedy and human stories alongside super heroes. 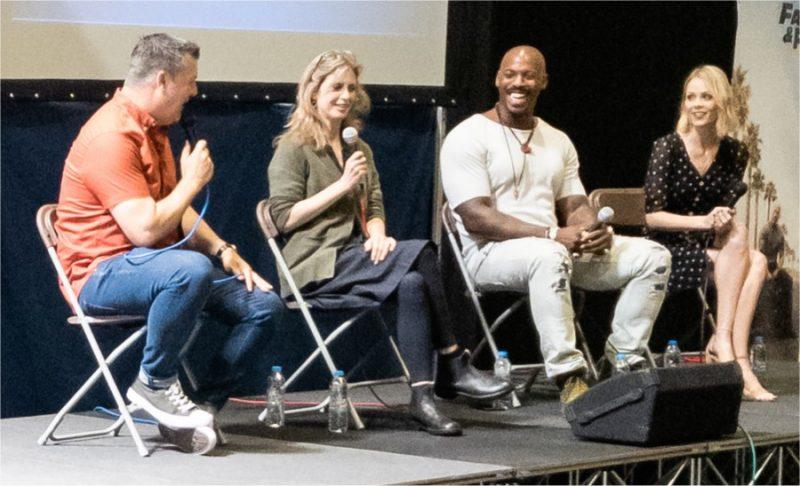 Following this talk was one with some of the Supergirl cast, Helen Slater, Laura Vandervoort and Mehcad Brooks.  They gave another interesting talk and really seemed to enjoy working with each other on Supergirl.  There was also much love for Melissa Benoist, making me want to meet her even more to complete my Supergirl collection.  One thing they all shared was that they hated doing wire work.  According to Mehcad it’s like having a huge wedgie and very uncomfortable!  Laura even said she had passed out doing her flying scene in Smallville.

By this point I was absolutely frozen as the aircon was on high.  There wasn’t much body heat as the hall had remarkably few visitors, outside was cold and wet so I couldn’t warm up anywhere.  My fingers were so cold I couldn’t even use my camera properly.  I even resorted to having a coffee, I hate warm drinks  but hoped it might help, it didn’t.  At this point I knew that I’d have to leave Collectormania 26 early. 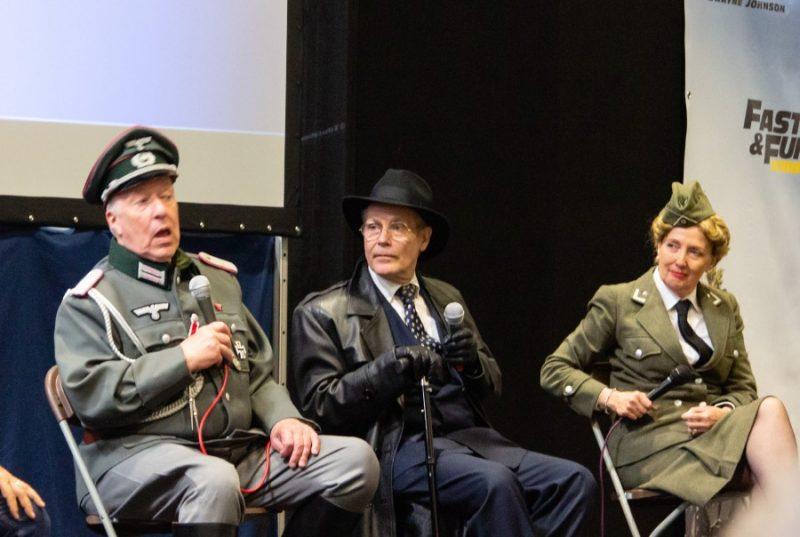 I managed to stay and watch the cast of ‘Allo ‘Allo! in full costume give a fun talk, then got my photo signed by Laura.  We then headed home where it took me several hours to warm up, but it was worth it.

I’m now trying to work out if I can afford, or organise care, to attend London Film and Comiccon.  I had decided I probably wouldn’t go, but with lots of people wanting to see me there and an interesting guest line up I’m finding myself really wanting to get there!

Yesterday after a stressful start to the day I spe

If @SamsungUK would like to give me an S20 Ultra I'll accessible blog the hell out of it, especially the camera side #GalaxyUNPACKED2020 #ICanDream #Accessibility

Finally a phone that is as good as the Nokia 808, guess it's not using Zeiss optics though #GalaxyUnpacked

Flip phone not really appealing to me, I used to like clamshell phones though

Yesterday after a stressful start to the day I spent the afternoon in Wales, visiting Raglan Castle then Cardiff ift.tt/2UrruCC pic.twitter.com/FfBg…