A very unscientific benchmark and details of my upgrade from an NVIDIA GTX 1060 to RTX 3060 Ti. A massive improvement in framerate.

I thought I’d give a brief update on my year so far as I’m sure some people think I’ve vanished into another dimension. The following is directly from my medical notes? 20 Feb 2022 00:00 Immunisation course to maintain protection against SARS-CoV-2 (severe acute respiratory syndrome coronavirus 2) 02 Mar 2022 13:19 Infected tooth socket Read more about Update for 2022 – Hospital and stuff[…]

A quick update about the site and some Newspaper and BMJ articles I wrote last year.

After my first adult holiday in Wales the year before I decided to book a holiday in East Sussex for 2017. 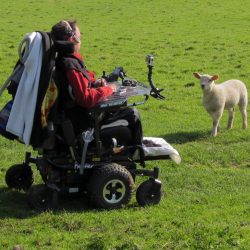 During this period of 12 weeks shielding I don’t want to look to the future or make plans.  So instead I’ve I decided to look back. Today I’m looking back to April 18th 2014 visiting Sudeley Castle.

These are my Samsung Galaxy S20+ first impressions.

The year had some highs but also lots of sadness.  My care, health and wheelchair have also caused lots of issues and stress and I’m honestly glad we are now in a new year.

A lot happened in these two years, I was admitted to hospital with angioedema, appeared in the BBC/Netflix series Requiem, had a holiday, was presented with an award from the High Sheriff of Gloucestershire and more.

Looks like I'll be reporting @RBandH transport department to PALS again, every time we visit we have problems. Stuck in hospital for an extra night because they can't sort a vehicle with stretcher space. We booked it yesterday like we were supposed too #stressed