A Mixed Couple of Weeks

It’s been a mixed couple of weeks for me, last week I was very busy so I really wanted to relax and enjoy the sunshine this week, I managed for the most part with a few hiccups along the way.

I’ll start off with a roundup of last week, firstly I had a meeting at Barnwood Trust with a few members of our mental health training workshop.  We were very productive and have produced a plan for moving forward this year and getting back to sharing our lived experiences with others who may benefit from our workshop.

The following day was a check up with my local respiratory physiologist, it went well and my results show my ventilation is still working perfectly.

On the Wednesday I visited my old University, Oxford Brookes, for an interview with the Alumni Communications Officer, Sirius.  We met up at the Headington campus where I had spent most of my time when studying applied physics in the nineties, after the interview he gave me a quick tour of the campus.

A lot has changed, the physics labs no longer exist for a start, but there was also a very familiar feel too, there are also some major improvements, nice large lifts, more than one accessible toilet, ramps to where the lectures give talks and even automatic doors!  The new buildings are beautiful too, modern and spacious, there were still a couple of buildings I recognised which was comforting and it still felt like “Brookes”. 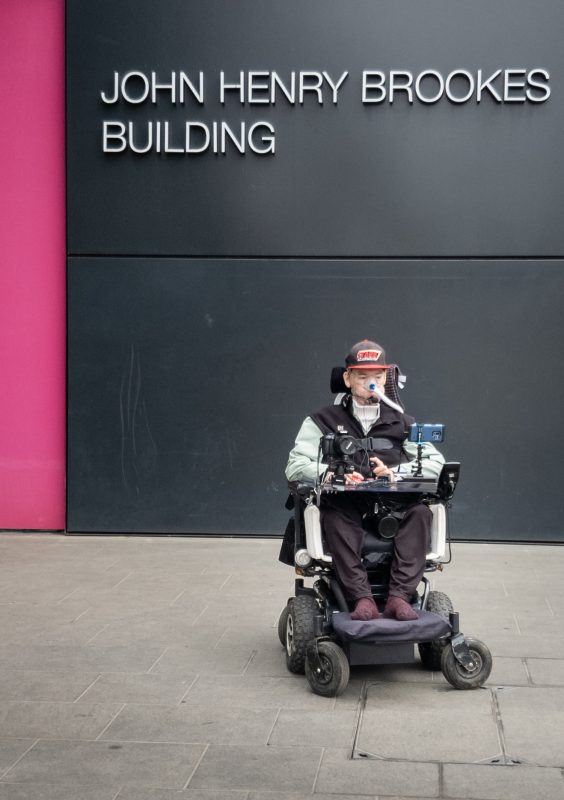 After visiting Oxford Brookes I had time to go to Magdalen College and walk in the footsteps of Tolkien and Lewis along Addison’s Walk, more on this in a future post, but I will say both the twitter account manager and porter were very friendly and helpful.  The walk itself was beautiful and something I won’t forget.

The next day we held interviews for DMD Pathfinders new development worker, it was good to be part of the process and went well, there will be an official update about the support worker from DMD Pathfinders soon.

Friday and Saturday involved walking the dogs and dropping Mum off shopping, I wasn’t in the best of moods feeling quite low and Grumpy. 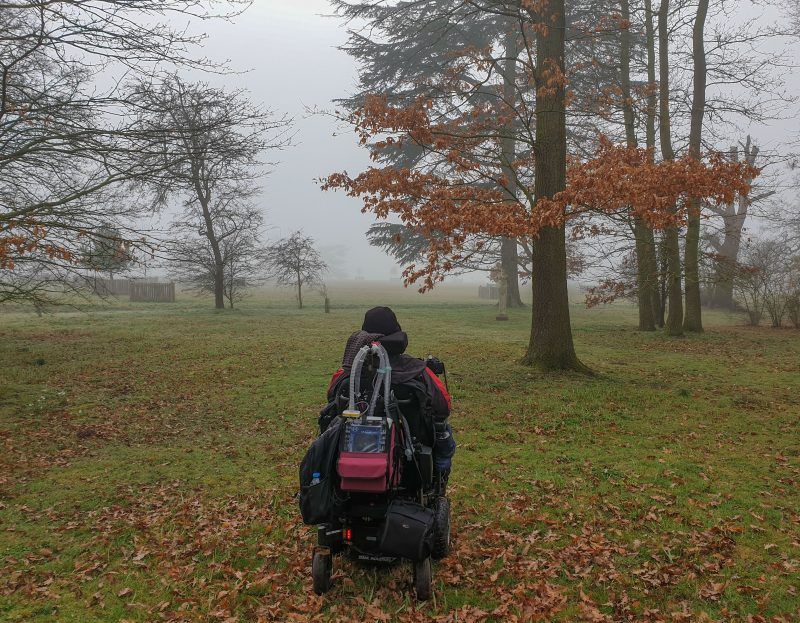 Sunday was okay, I left Cheltenham in the bright sunshine heading for Croome park which is only a thirty minute drive from where I live, the weather couldn’t have been more different when we arrived, it was freezing, total cloud cover and thick fog!  I made the most of it and stayed until just after lunchtime, getting some moody and atmospheric photographs.

I will also quickly mention the Saturday before.  I managed a night out at the Frog and Fiddle for my Friend’s, Verity White, Album launch!  A great night with great songs, plus of course hugs and kisses from the amazing Verity herself.

I needed to relax this week after last week being so busy and I wanted to take some nice photographs too, luckily the weather was in my favour, I’ve never known such a warm week in February. 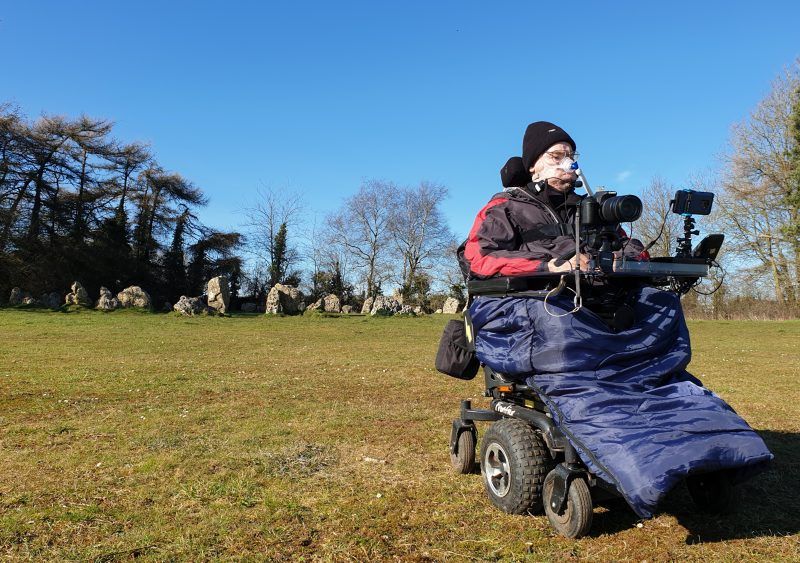 Monday is my carers shorter day so I couldn’t go too far, I decided on a trip to Birdland in Bourton-on-the-Water, it’s always calming there and very accessible.  I got a few shots but as it was such a nice day decided to head to the Rollright Stones before returning home.  I love it there, although this time I was slightly frustrated by a family having a picnic.  No I’m not just being a grumpy old man who has had his peace disturbed, there were several young children who were being allowed to climb all over these ancient stones.  I can’t imagine what damage they probably caused to the stones and the moss growing on them, there are signs explaining why you shouldn’t climb the stones, it’s very sad that these children weren’t being taught to respect our heritage. 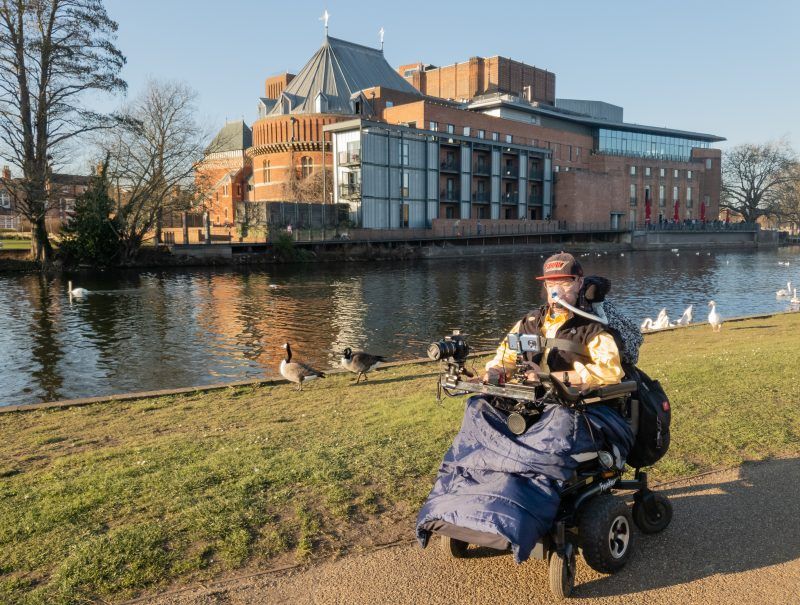 Tuesday was a long day so I was able to head further afield, I chose Charlecote Park followed by Stratford-upon-Avon on the way home.  Charlecote is lovely on a warm, sunny day, it’s fairly accessible although some ground is uneven and there are gravel and grass paths throughout.  I managed to get lots of photos of their deer, they weren’t as close to the path as last time but my zoom lens did a good job of capturing them.

On our return to the car park my carer tried to deploy the van’s tail lift as usual, but this time it just clicked and did nothing, she pushed and shook it but it refused to budge.  Luckily there is a manual release for the tail lift but it’s tricky and my carer hadn’t had to use it before.  After much fiddling and swearing the tail lift suddenly sprang to life, by this point I had got very close to the back of the van to try and give my carer some instruction, suffice it to say I moved very quickly while shouting “Stop! Stop!”, to avoid getting crushed.  Fortunately the only casualty was my carers bad and a can in it which was split open. 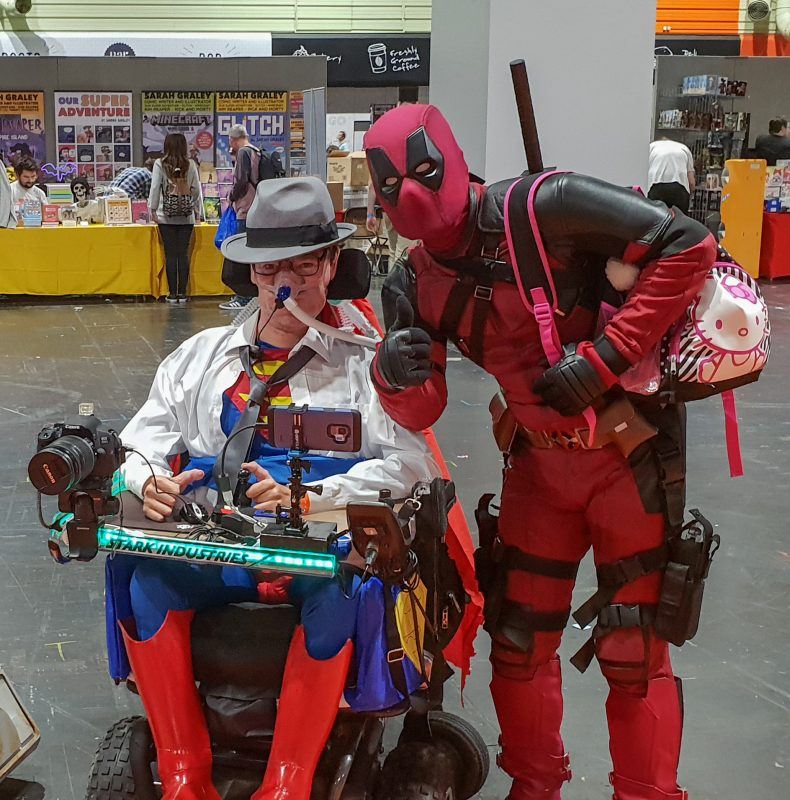 I decided to risk continuing on to Stratford-upon-Avon once I was finally in the van, we had a lovely time walking along the river and I bumped into a guy I had met last year at comiccon, strangely he was dressed in the same Deadpool costume…

We wandered until it started getting dark, which was quite sudden and the temperature plummeted.  A quick tip here, don’t rely on Google maps in a wheelchair, we were directed to a footbridge which would have let us quickly return to my van if it hadn’t had steps!  We then wandered backwards and forwards trying to find other ways, Google maps kept changing it’s mind on the direction we should be walking and also tried to take us along a busy road with no footpath.

My anxiety began really kicking in as I got colder and colder, then the battery gauge on my wheelchair suddenly dropped to yellow, for some reason the gauge isn’t linear, once you hit yellow you need to get home quickly.  We finally just backtracked on ourselves, which took nearly half an hour, by the time we got to the van my chair was on red, beeping and moving very sluggishly.

Wednesday was again beautiful and I had intended to visit Newark Park as it’s close and not too big, I wasn’t going to repeat the mistakes of the day before, but just as we were leaving a friend sent me a text saying he was on the bus to Westonbirt Arboretum.  Westonbirt is quite close to Newark park so I decided to see if he wanted some company and changed my plans. 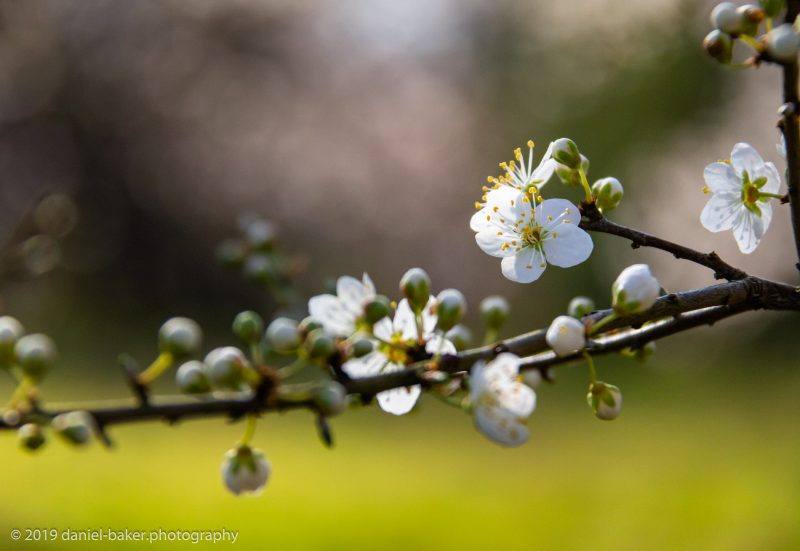 Westonbirt is again very accessible and also very beautiful, we spent several hours wandering, chatting and taking photographs together.  I really enjoyed seeing the early blossom on the trees and the gorgeous colours, everyone was extremely friendly too, the sun sometimes brings out the best in people.  I actually enjoyed chatting to random strangers and before leaving did my good deed of the day by directing an elderly lady on a scooter back to the cafe as she had gotten slightly lost, we followed and made sure she was headed down the right path before going back to the car park and home.

Today, Thursday, I had two meetings, one with a researcher working on new ways to measure quality of life for people living with Duchenne Muscular Dystrophy and a management meeting with DMD Pathfinders.  I also had some very strange dreams last night about being depressed, other things that worry or upset me about my life and of people who have hurt me.  I cried a lot in those dreams, I’m hoping it’s a good thing and my brain is processing stuff, not a sign I’m headed for a patch of bad mental health.

Tomorrow is the first day of the Mindfulness Photography exhibition I’m taking part in, I’m looking forward to it and catching up with my classmates.  I’ll be there tomorrow afternoon from 2 pm and then probably around midday Saturday and Sunday so pop in if any of you are in or around Stroud.  Some of my classmates have taken some amazing photographs so I’m sure you won’t be disappointed.

If you have problems viewing any images on this page, or want to see them in higher resolution, you can find most of them on EyeEm.