I have decided to split these posts into years as nobody wants to read an autobiography!  First off is A Decade of Change – 2010 to 2013.

This last year was tough and the next isn’t looking great either, I am feeling low and my anxiety is on the rise.  So I wasn’t sure that I wanted to write these posts.  But my life has changed immensely in the last ten years.  I feel I owe all the people who have helped me get to where I am now to write something.  It’s also a way to thank them all, those I know, those I only know online and also those I have never met or spoken too, but have helped me none the less.

Although I spent this whole year in bed with my nights and days switched around, I still achieved some things I am proud of.  At the time I didn’t really realise I was depressed or had been diagnosed as agoraphobic.  All I knew was I didn’t want to leave my bed and had no aims for the future.  My panic attacks were still severe and regular too.

During this time I worked on NASA WorldWind, doing coding, management and making videos.  Early in the year some animations I had created appeared in a US TV show called “Hooked on the fly“.  I’m very proud of my work on this, I put in lots of hours and hard work getting things just right.

I had ongoing issues with both my care agency and Continuing Healthcare, some things got sorted, others didn’t.  My Cousin Natalie died in her early twenties which broke my heart.  I had reconnected with her on Facebook as an adult but never got chance to meet her again.

With encouragement from my nurse Berni and others I started talking to wheelchair services, with the aim of maybe getting out of bed again.  The first assessment went extremely badly and things didn’t improve much after that either.

I got a Puppy, Kara-El, in December.  Such an amazing Christmas present, although she was a bit of an ear biter!  Her first Christmas Eve was spent at the Vet’s, she had a prolapse, but luckily was back home the next day.

Christmas was tough, not just because of my lovely Kara but also because two thugs attacked my nurse outside my home.  The miscreants threatened her with a screwdriver, threw her to the ground and assaulted her demanding her car keys.  Now anyone who knew Bernadette Gamble knew she would do anything for her children, and all their Christmas presents were in her car, she fought back and eventually they ran.  They were caught but eventually the case was thrown out of court on a technicality.  I don’t think she ever fully recovered from the trauma of that night.

In February my fight with wheelchair services escalated.  They had decided that if I wanted a new wheelchair I would need to prove I could sit out of bed in my old wheelchair.  All well and good, except they insisted on servicing my old wheelchair first, during which they took the batteries out and refused to replace them!

I continuing working on Worldwind this year and also had my first activation for the SBTF as a media monitor. 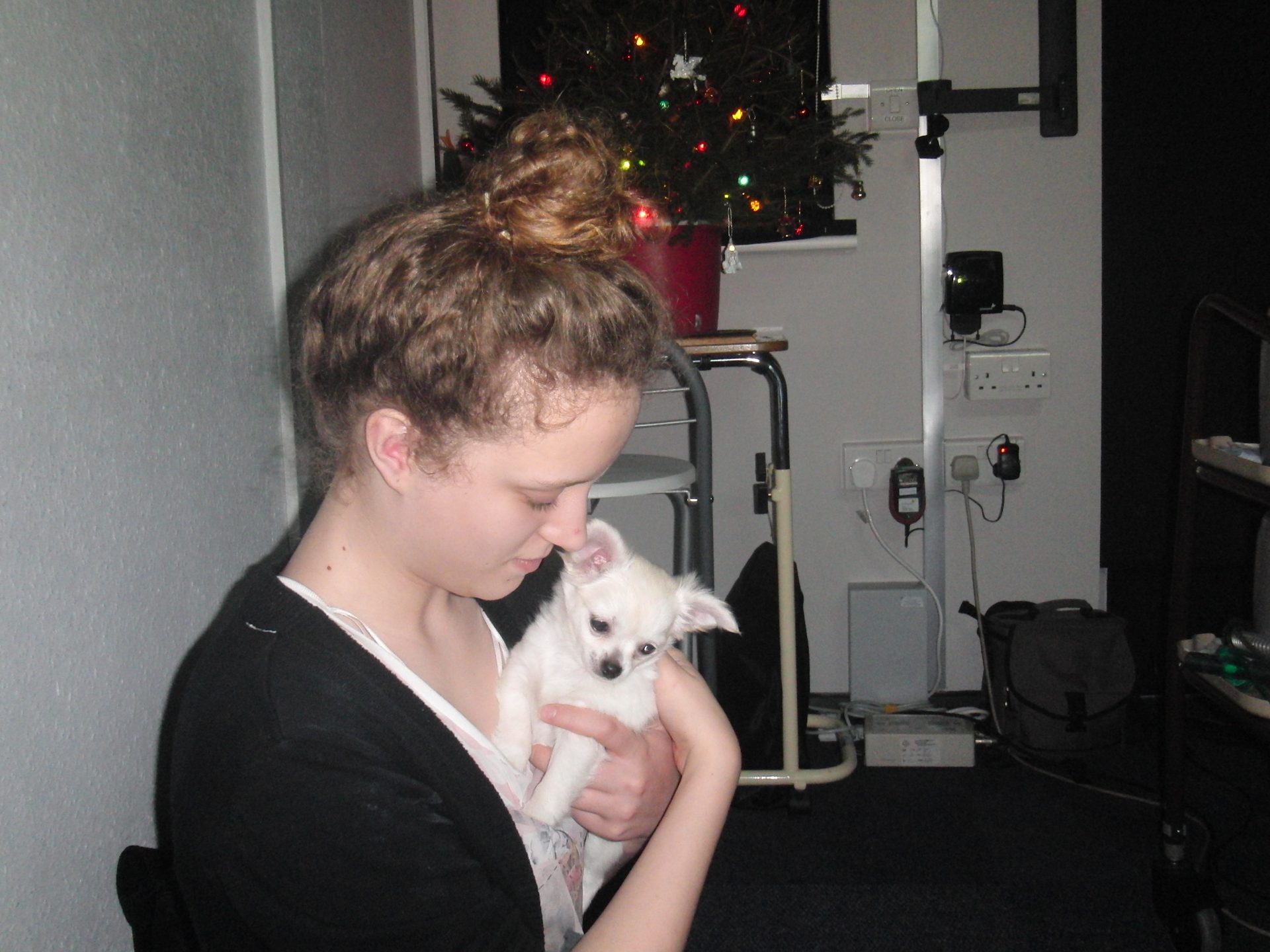 I also got claimed by a visiting Chihuahua.   A friend brought over her Chihuahua’s new puppies so I could see them, immediately Peppa climbed on my chest and snuggled down.  When her brothers came near she growled, also not letting Kara or Mya near.  Shortly afterwards her owner offered to sell her to us.  Peppa has been my faithful companion ever since.

In May my amazing Kara-El gave birth to five beautiful puppies.  Two of these, Alfie and Blue were given to my neighbours.  Tilly was given to my Aunt.  Sammy to Berni’s Daughter DeeDee and Dexter we decided to keep ourselves.

After getting nowhere with Wheelchair services I decided to start fundraising for a private wheelchair.  With several articles appearing in local newspapers and a charity dinner, where my Mum got to meet Mike Tindall!  The money was raised by October.  With donations coming from extremely generous people from Gloucestershire and beyond, along with several grants. 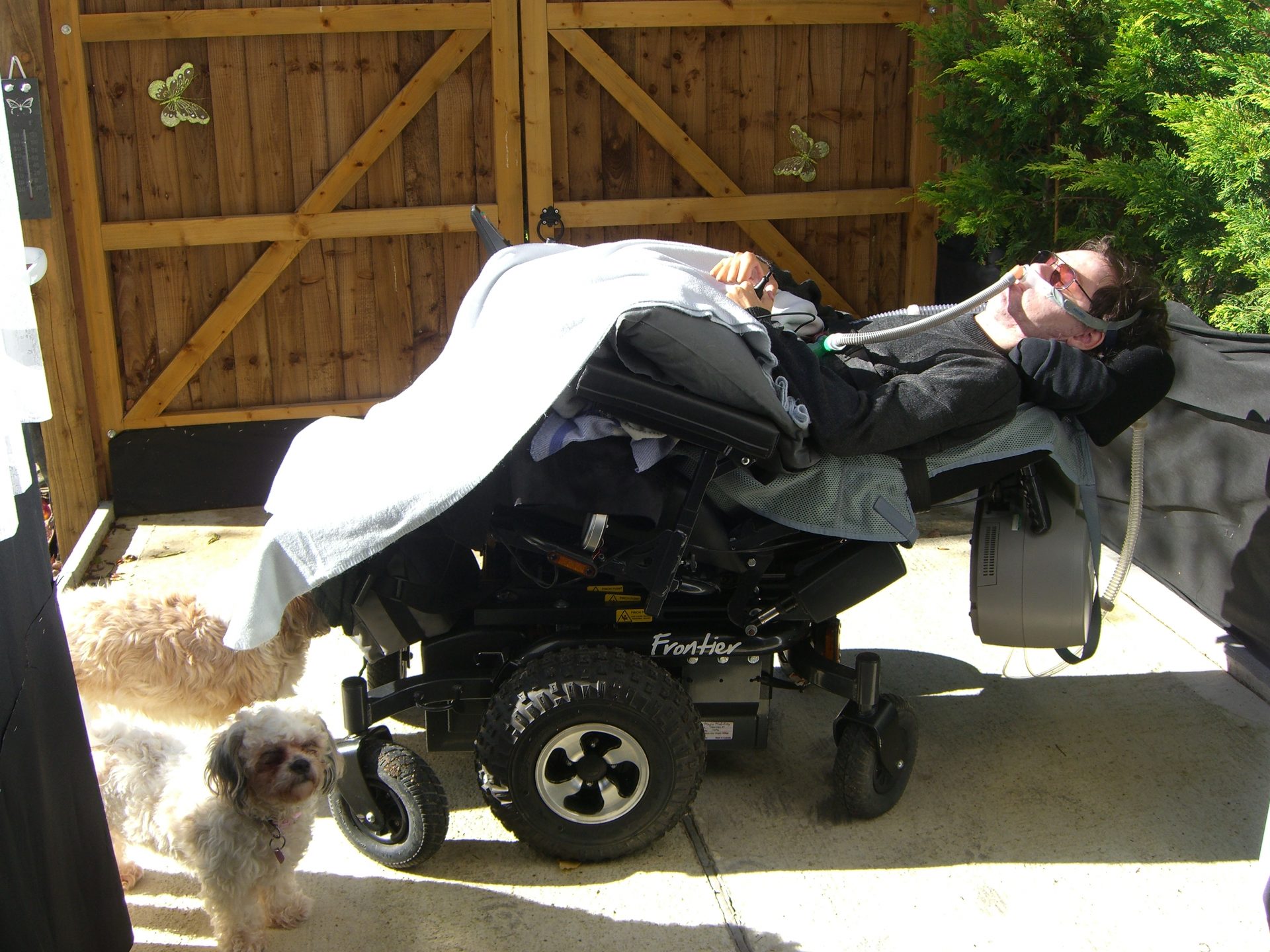 The next months involved building my stamina in my new wheelchair.  At first I could only manage to get to the back of my block of flats.  This slowly increased to the end of the road, then round the block.

January saw snow and I managed to have my first play in it for many years!  I continued to push forwards with my wheelchair efforts with help from friends.  Eventually managing long walks.

I will now admit, for the first time, what helped me most, love, it gave me strength I didn’t know I had.  This was the first (and last) year I had had romantic feelings for any anyone that were reciprocated.  Things may not have gone the way I wished for in the end, but good came of it and I wouldn’t be where I am now without that.

In May I managed my first trip out in my van, a huge step for me.   Being inside my van had always made my panic attacks worse.  Although my anxiety was awful and it was only a five minute drive, I did it!  This would open up a whole new world for me eventually.

I joined a local charity called DROP as well this year.  It was a charity supported by Barnwood Trust, the aim was to fight stigma and exclusion for those with both Mental and physical health challenges.  I learned a lot from DROP, made friends who are still a big part of my life, and was pushed out of my comfort zone.

During this period I also found a new passion, photography.  First of all I used a Nokia N8 attached to my wheelchair controlled by a mouse.  Later in the year I progressed to using a GoPro.  Photography has helped me with my mental health in many ways.  It was a distraction from anxiety at first, then encouraged me to want to explore further away from home to get new shots.   I could hide behind the viewfinder, separate from reality in a way, it was a safe space.

In November I pushed myself further than ever and visited my first comiccon, MCM Birmingham.  This was the start of something special that I didn’t realise at the time.  Comiccons are now a big part of my life, they are somewhere I feel I belong.  I have new friends, people know me and I’m accepted with no questions asked or judgment given.

Oh and I also managed to break my ankle by ramming a metal table!  It’s not quite as stupid as it sounds, I was on a walk with my Aunt when my ventilator mask started slipping off.  I could slowly feel myself getting less and less air, I ramped up the speed on my wheelchair and zoomed home.

On arriving at my room Mum was nowhere to be seen, I couldn’t breathe, so I did the only logical thing I could think of.   I smashed myself into a table to make a noise and get attention!  It worked and Mum reattached my mask, my ankle was in extreme pain though.  Apparently metal beats bone, who knew?  We wrapped it up, hoping it was just sprained.  After about six weeks of excruciating pain and no improvement, I finally visited the hospital, my leg was quickly plastered with several small fractures found.