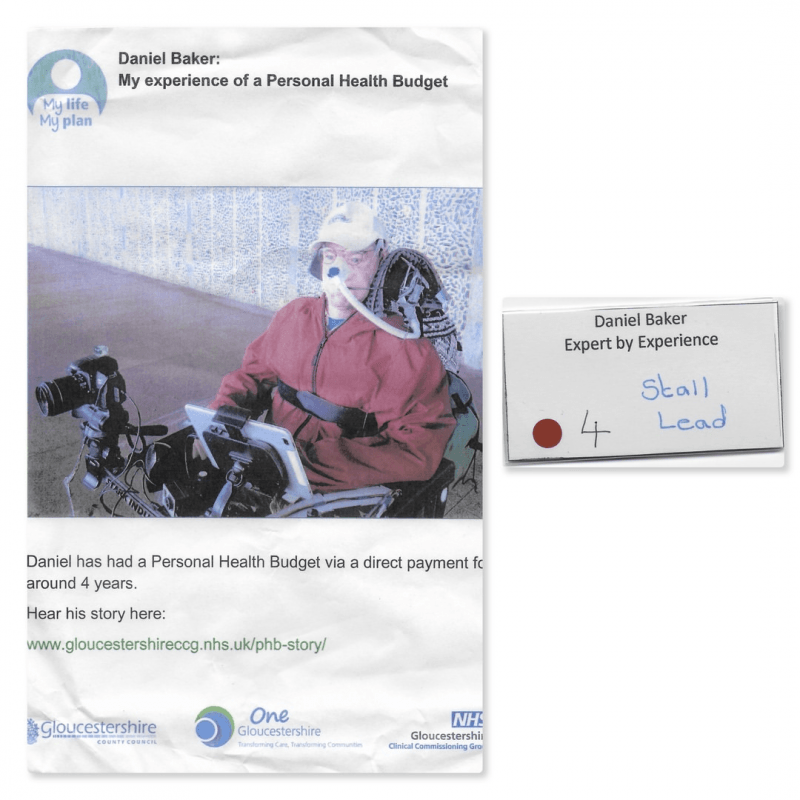 This year began with me being asked by my local NHS Continuing Healthcare department to give my first solo public talk at the South West CCG’s Integrated Personal care conference, I talked about Personal Health Budgets to five groups of healthcare professionals, over fifty professionals in total.  It turned out to be an exhausting but rewarding experience with lots of interest and questions. 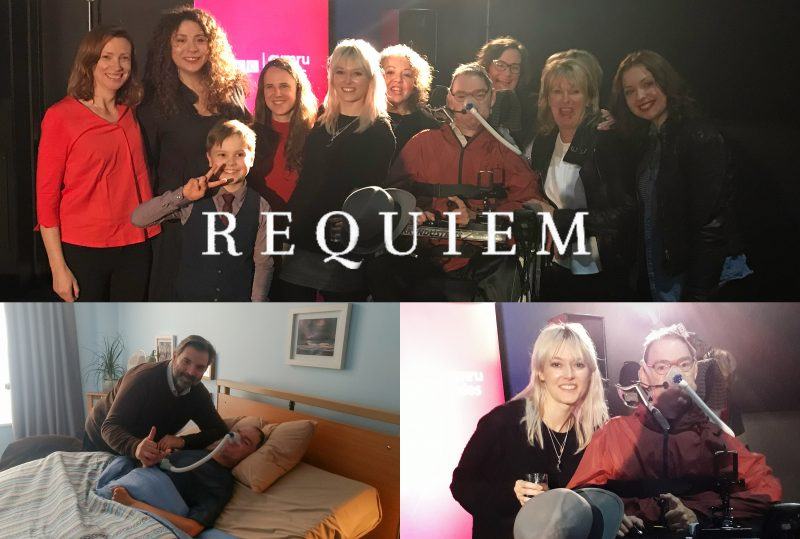 Shortly after this I attended the Requiem Première in Cardiff, I couldn’t tell anyone why I had been invited for another month due to my NDA.  Eventually I was able to tell my friends and family that I had filmed a small part for the BBC/Netflix supernatural drama Requiem (blog post) in July 2017, which aired on the BBC in February and was later released worldwide by Netflix, luckily I am very good at keeping secrets! 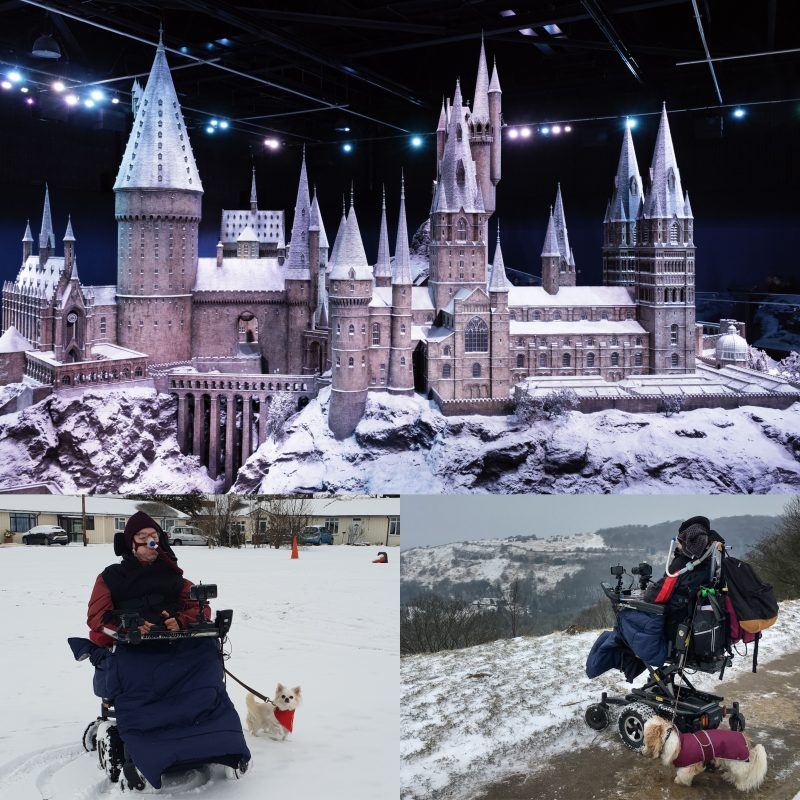 Hogwarts at Harry Potter World, in the snow with chihuahua Peppa, looking out at the snow from Birdlip with Cava-Tzu Mya

I managed to also enjoy the snow we got this year, although it did mean I missed comiccon and seeing my friend Tabitha, but I did get to Harry Potter World.  There were a couple of cold related incidents I really didn’t enjoy though, like too much condensation building up in my mask, breathing in water is no fun.  I also almost got stuck outside when the van’s tail lift decided not to deploy at Birdlip hill, I panicked a little as my PA moved the van on to flatter ground, I could feel my internal body temperature dropping very fast, luckily the tail lift did deploy after moving the van. 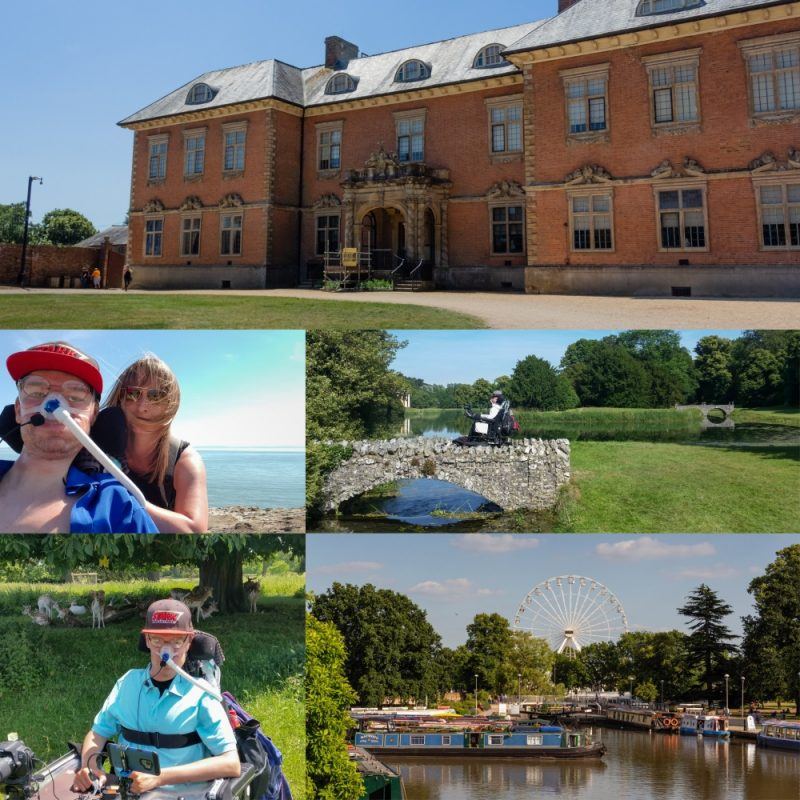 Tredegar House, Barry Island, on the bridge Sarah stood by in Labryinth, sitting in front of Deer at Charlcote Park and Stratford-upon-Avon

The next couple of months involved training my most trusted agency carer to take me out and about safely before my PA went on holiday.  I am very glad that worked out or I would have missed most of the gorgeous summer, I was able to visit many amazing places I hadn’t been before, including Tredegar house (where some of Requiem was filmed), West Wycombe (where my childhood favourite Labyrinth was filmed), Black Park, Barry Island (where I got a touch of heatstroke and also got stuck in the sand) and Stratford-upon-Avon. 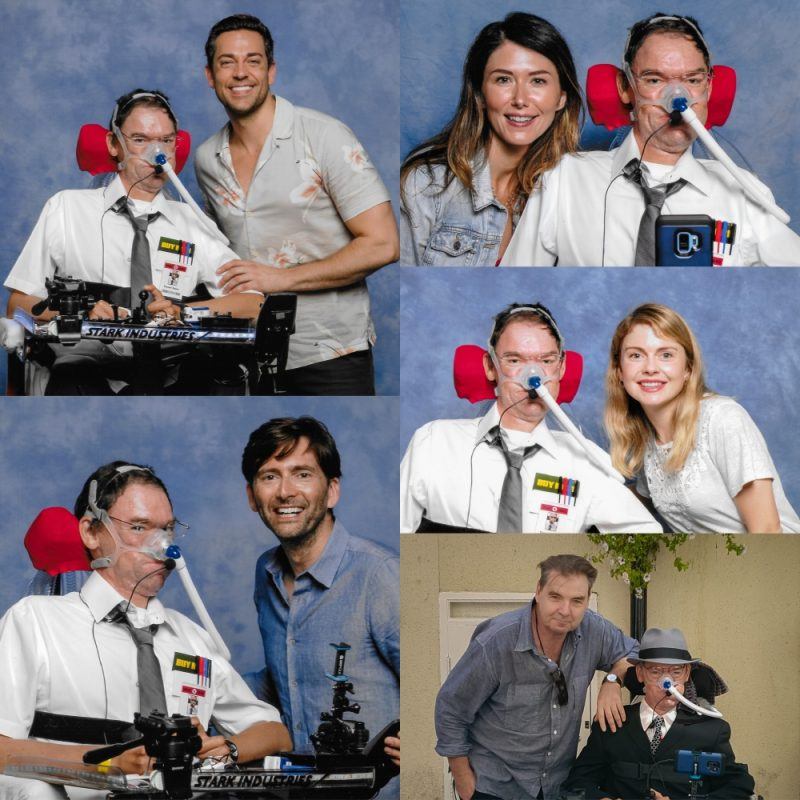 Next up was London Film and Comiccon where I met an old school friend plus Zachary Levi (Chuck and the upcoming Shazaam), David Tennant (Dr Who, Jessica Jones etc.), Jewel Staite (Firefly) and Rose McIver (iZombie).

This was followed by a trip to Bath to see my Requiem ‘Dad’ Brendan Coyle in The Price, we had a lovely catch up before and after the play and I was also introduced to Joy Harrison, David Suchet and Adrian Lukis.

A spanner was then thrown in the works when my PA, on short notice, decided to tell me she was going back to college and wanted to reduce her hours from three days and two nights a week to one day and two nights!  I had to quickly reorganise care, it was quite stressful for a couple of weeks but I managed to get something sorted. 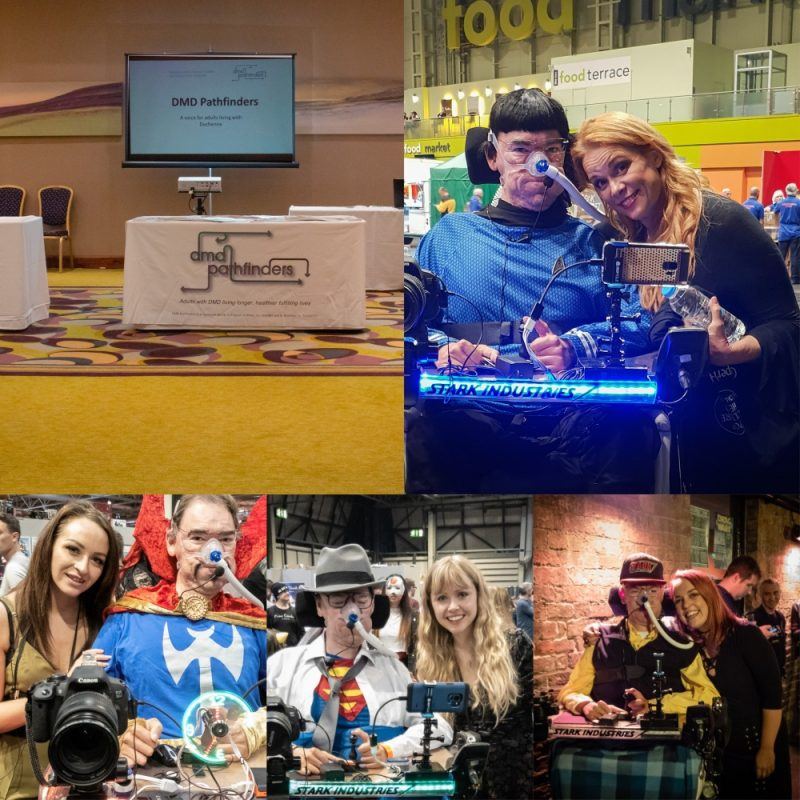 The rest of the year continued to be busy with the Action Duchenne international conference where I took photos on behalf of DMD Pathfinders, a content advisory meeting in London with MDUK, Destination Star Trek, MCM (where I finally caught up with Tabby), watching my friend Verity perform two local gigs, a mindful photography course taught by the brilliant Ruth Davey,  watching my first fireworks display in years at the Cheltenham Racecourse, attending the Gloucestershire NHS 70th awards and more. 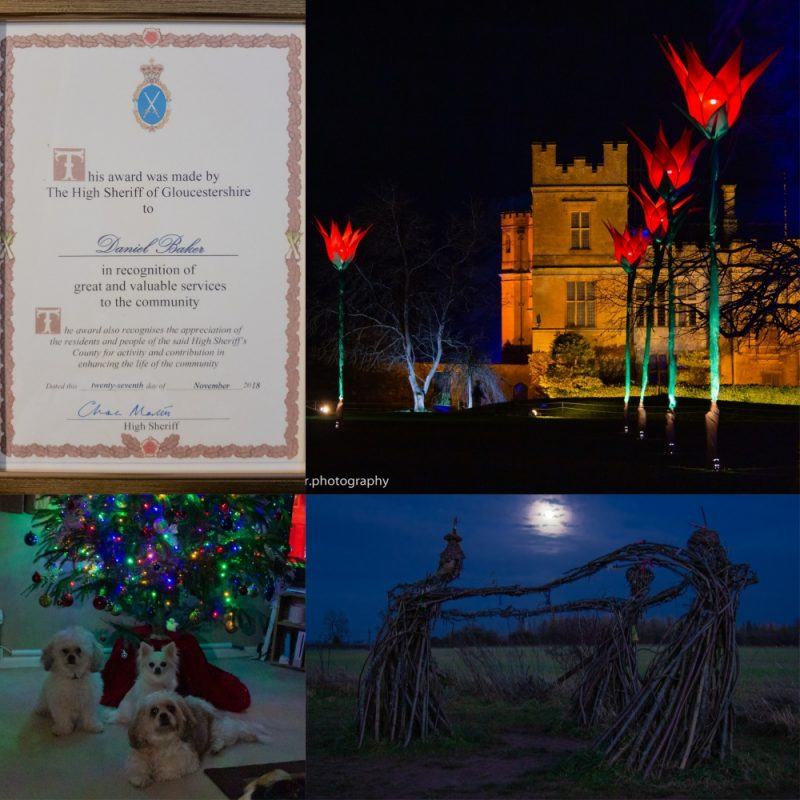 Certificate from the High Sheriff of Gloucestershire, Sudley castle spectacle of light, Kara Mya and Peppa under our Christmas tree and the witches (fairies) of Rollright under the winter solstice moon

Christmas started as always with Muscular Dystrophy UK’s Spirit of Christmas concert at Gloucester Cathedral, this year there was a surprise for me as The High Sheriff of Gloucestershire presented me a totally unexpected award before the concert started!

I then attended the Barnwood Trust Christmas celebration, visited the Sudeley Castle festival of lights and was asked to join in the Winter Solstice ceremonial circle at the Rollright stones when visiting to take photos.

Looking back I have actually had a very busy and successful year, I met up with old friends, finally got to meet Ruth and Helen, who I have known for years through MDUK but never met in person, attended my first ‘gig’, got an unexpected award and met the High Sheriff of Gloucestershire, Mayor of Gloucester and the new CEO of MDUK.  I visited many new places, have been interviewed on the radio and in the local press, appeared on BBC One, attended the Three Counties show for the first time, gave a solo talk to high ranking CCG members and lots more I just haven’t got the room to mention here.

And one of the most special things from this year was meeting Darcy, one of my oldest friend’s new baby daughter.

You can see a lot of what I have done and the places I’ve visited this year on Instagram and in my Google 2018 Review album below.

Wishing you all a happy and healthy New Year!